This bilingual English/Spanish story is based on the life of Galápagos Islands conservationist Valentina Cruz. Raised on the island, Valentina grew up surrounded by beauty: the blue-green sea, the playful penguins and sea lions, the sounds of the waves crashing against the rocks, and her father’s two tortoises, Carlitos and Isabela. Valentina goes away to school, but promises the animals and her islands that “I will not forget you… And I will help to keep you safe.” It’s a promise she keeps, returning to the islands on school holidays, camping out on remote islands to live and learn among the different flora and fauna, eventually becoming a biologist who returns to the islands to teach visitors to love her home as she does, and about the importance of preservation and conservation.

Author Marsha Diane Arnold met Valentina on a 2007 trip to the Galápagos and was inspired to write Galápagos Girl in the hope that readers would learn, as Valentina did, to help keep nature safe. Under threat from invasive species, active tourism, and encroaching humans, plant and animal life on the Galápagos is increasingly vulnerable. With bright, tropical colors and bold illustration, Pura Belpré Honoree Angela Dominguez transports readers to the magical islands; she communicates the feeling that we’re seeing something truly special as Valentina moves among unique plants and animals that aren’t found anywhere else on Earth. We’re given a special, secret pass to paradise as we turn each page of Galápagos Girl, and reading it with an unabashed sense of wonder will inspire that spark in a storytime group. An author’s note and a note about the Islands explains Marsha Diane Arnold’s first meeting with Valentina and provides background on the Islands. Five pages of information about the animals introduced in the story adds nice background information to the story, as does a solid bibliography. The bilingual text makes it accessible to Spanish and English-speaking readers.

The storytelling gives readers a glimpse at Valentina’s passion for conservation and illustrates how growing up with a respect for nature creates a better world for everyone. Galápagos Girl is a worthwhile add to storytime collections, bilingual collections, and natural history collections. There’s a free Animals of the Galápagos matchup download available at the Lee & Low website. 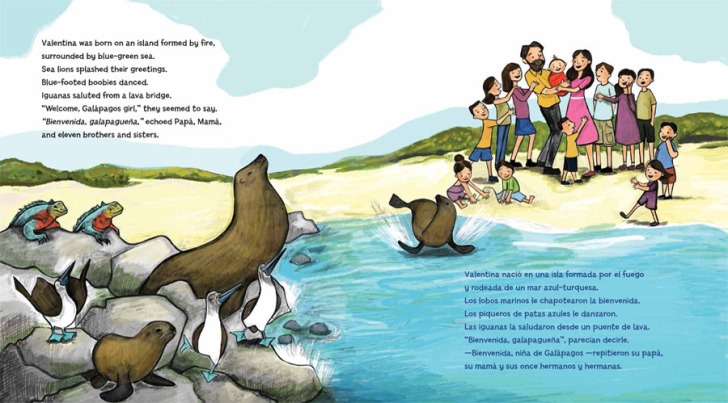 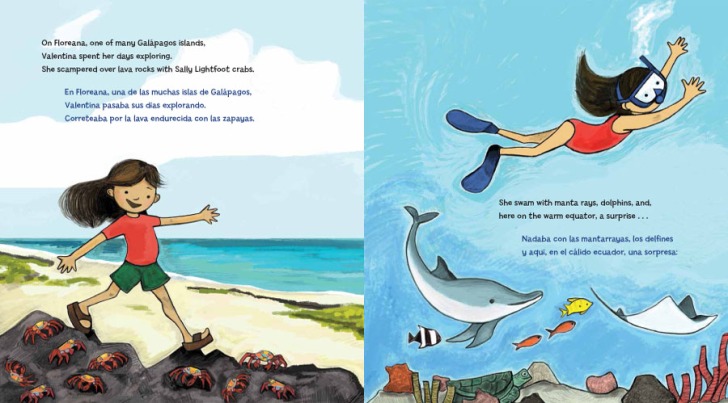 Marsha Diane Arnold is an award-winning picture-book author. Her past titles include the Smithsonian Notable Book The Pumpkin Runner and Lost. Found., which received three starred reviews. Marsha was inspired to write this story after traveling to the Galápagos Islands, where she met Valentina Cruz and had the opportunity to swim with sea lions and dolphins. She lives with her family in Alva, Florida. You can find her online at marshadianearnold.com.

Angela Domínguez is the author and illustrator of several books for children, including the Children’s Book Press title Let Me Help! / Quiero ayudar!, Marta Big and Small, and Maria Had a Little Llama, which received the Pura Belpré Illustration Honor. In 2016, she received her second Pura Belpré Honor for her illustrations in Mango, Abuela, and Me by Meg Medina. When Angela is not in her studio, she teaches at the Academy of Art University, which honored her with their Distinguished Alumni Award. She lives in Virginia. Visit her online at angeladominguezstudio.com.

One thought on “How islands raised an activist: Galápagos Girl/Galapagueña, by Marsha Diane Arnold”