I’ve been enjoying Remy Lai’s storytelling ever since I picked up an ARC for Pie in the Sky a few years ago. She creates a great mix of visual and prose storytelling, creates instantly memorable and lovable characters, and successfully weave humor and pathos into her stories to get at the heart of deep issues. She’s got a new graphic novel series, Surviving the Wild, that tells fictional animal stories based on true events, and calls attention to the effects of climate change and habitat encroachment on the animals we share this planet with. Let’s look at the first three stories! 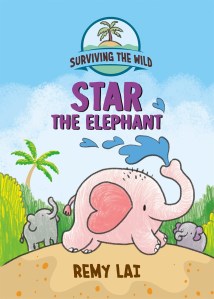 Star is a young elephant living in a herd with his mom and aunt, but the herd needs to find a new home because resources are becoming scarce. During the journey, Star is separated from his family and left to find his own way to safety and, hopefully, his family. Inspired by a 1990 story about bull elephants losing their home, Star’s story has some differences, noted in the back matter, but the heart of the story is the same: deforestation and human interference are causing animals to lose their homes. Star’s fear of humans is not without cause, but there’s some tension as readers worry that Star won’t be able to tell the difference between harmful humans and the humans who wants to keep elephants safe, bringing them to a sanctuary. Star reacts in a very relatable, childlike way to being separated from family and to stranger danger. The colorful artwork and dialogue makes for a very readable animal story; back matter includes deeper insight on the 1990 story that inspired Star’s tale, elephant facts, and ways kids can help keep the Earth livable for everyone.

Rainbow is a young koala who’s enjoyed life in his mom’s pouch. When Mom tells him it’s time for him to go off and live on his own, he’s scared! It’s not as friendly out there when you don’t have your mom with you, and poor Rainbow can’t find a good tree of his own or a place where he can get water. It’s hot and the forest is dry, and the creek that he remembers mom taking him for water seems to be dried up. Thirsty, tired, and dispirited, he escapes humans and finds himself in the middle of an exodus: there’s a forest fire coming, and Rainbow is right in the middle of it. Rainbow’s story is inspired by the Australian bush fires of early 2020, which impacted over 60,000 koalas and millions of other animals and insects. Rainbow’s story hits hard; there are painful moments as he surveys the devastation around him and burns his own paws as he tries to find safety and shelter. Rainbow’s fear clearly comes through in his first-person narration, whether it’s through his speaking out loud to his mother as he struggles to survive in the wild, or to calm himself as he sees the forest burning around him. The stark, decimated landscape is heartbreaking in the aftermath of the fire.  Once again, we worry that Rainbow won’t understand that some humans – in this case, the rescuers searching the forest to bring animals back to animal hospitals and rehabilitation facilities. Back matter includes the story behind Rainbow’s tale, koala facts, facts about climate change and ways that kids can take action. 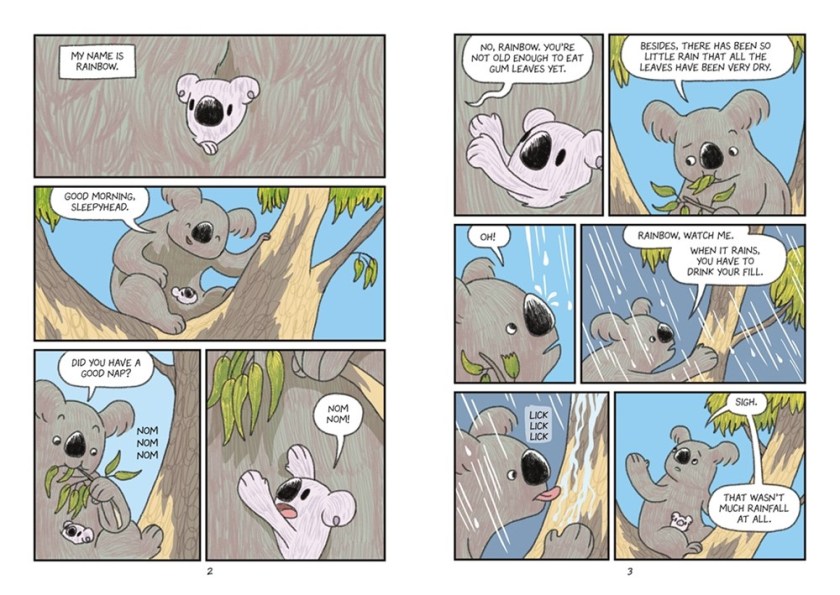 Sunny is an oceanic whitetip shark on the hunt for some food, but ends up the protector for a group of pilot fish who promise to keep her clean in exchange for food crumbs. Sunny isn’t sure she’s thrilled about having a group of chatty fish swimming around her, but she tries to be good-natured about it. One day, what she thinks is a yummy squid tentacle turns out to be a plastic ring, which wraps itself around one of her fins and impacts her movement. Since she’s a growing shark, that ring is going to get tighter and more uncomfortable as she gets bigger – and it’s already causing a problem for her when trying to eat. She’s got to find a way to break free of the ring, especially before the winter sets in. Will the oceanographers who tagged her be able to help? Inspired by a 2019 news story, back matter talks about the creative adjustments made to the original story while still bringing home the impact of pollution on our oceans and ocean life. Back matter also includes shark facts and ways kids can help keep plastic use down.

Each of these stories is such a strong statement on how humans are failing as stewards of the planet, yet filled with hope and awareness of how we can also be the change that puts things back in balance. Remy Lai creates characters that have much in common with readers, to foster a relationship between kids and the planet, and them empowers them with simple, powerful ways to bring about change. The Surviving the Wild series is a must for your graphic novel collections.