I’ve been enjoying Remy Lai’s storytelling ever since I picked up an ARC for Pie in the Sky a few years ago. She creates a great mix of visual and prose storytelling, creates instantly memorable and lovable characters, and successfully weave humor and pathos into her stories to get at the heart of deep issues. She’s got a new graphic novel series, Surviving the Wild, that tells fictional animal stories based on true events, and calls attention to the effects of climate change and habitat encroachment on the animals we share this planet with. Let’s look at the first three stories!

Star is a young elephant living in a herd with his mom and aunt, but the herd needs to find a new home because resources are becoming scarce. During the journey, Star is separated from his family and left to find his own way to safety and, hopefully, his family. Inspired by a 1990 story about bull elephants losing their home, Star’s story has some differences, noted in the back matter, but the heart of the story is the same: deforestation and human interference are causing animals to lose their homes. Star’s fear of humans is not without cause, but there’s some tension as readers worry that Star won’t be able to tell the difference between harmful humans and the humans who wants to keep elephants safe, bringing them to a sanctuary. Star reacts in a very relatable, childlike way to being separated from family and to stranger danger. The colorful artwork and dialogue makes for a very readable animal story; back matter includes deeper insight on the 1990 story that inspired Star’s tale, elephant facts, and ways kids can help keep the Earth livable for everyone. 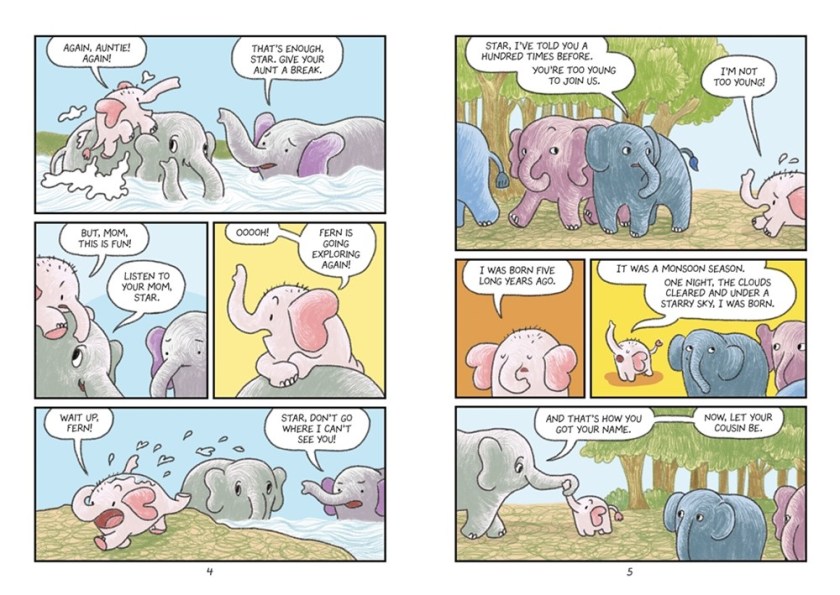 Rainbow is a young koala who’s enjoyed life in his mom’s pouch. When Mom tells him it’s time for him to go off and live on his own, he’s scared! It’s not as friendly out there when you don’t have your mom with you, and poor Rainbow can’t find a good tree of his own or a place where he can get water. It’s hot and the forest is dry, and the creek that he remembers mom taking him for water seems to be dried up. Thirsty, tired, and dispirited, he escapes humans and finds himself in the middle of an exodus: there’s a forest fire coming, and Rainbow is right in the middle of it. Rainbow’s story is inspired by the Australian bush fires of early 2020, which impacted over 60,000 koalas and millions of other animals and insects. Rainbow’s story hits hard; there are painful moments as he surveys the devastation around him and burns his own paws as he tries to find safety and shelter. Rainbow’s fear clearly comes through in his first-person narration, whether it’s through his speaking out loud to his mother as he struggles to survive in the wild, or to calm himself as he sees the forest burning around him. The stark, decimated landscape is heartbreaking in the aftermath of the fire.  Once again, we worry that Rainbow won’t understand that some humans – in this case, the rescuers searching the forest to bring animals back to animal hospitals and rehabilitation facilities. Back matter includes the story behind Rainbow’s tale, koala facts, facts about climate change and ways that kids can take action.

Sunny is an oceanic whitetip shark on the hunt for some food, but ends up the protector for a group of pilot fish who promise to keep her clean in exchange for food crumbs. Sunny isn’t sure she’s thrilled about having a group of chatty fish swimming around her, but she tries to be good-natured about it. One day, what she thinks is a yummy squid tentacle turns out to be a plastic ring, which wraps itself around one of her fins and impacts her movement. Since she’s a growing shark, that ring is going to get tighter and more uncomfortable as she gets bigger – and it’s already causing a problem for her when trying to eat. She’s got to find a way to break free of the ring, especially before the winter sets in. Will the oceanographers who tagged her be able to help? Inspired by a 2019 news story, back matter talks about the creative adjustments made to the original story while still bringing home the impact of pollution on our oceans and ocean life. Back matter also includes shark facts and ways kids can help keep plastic use down. 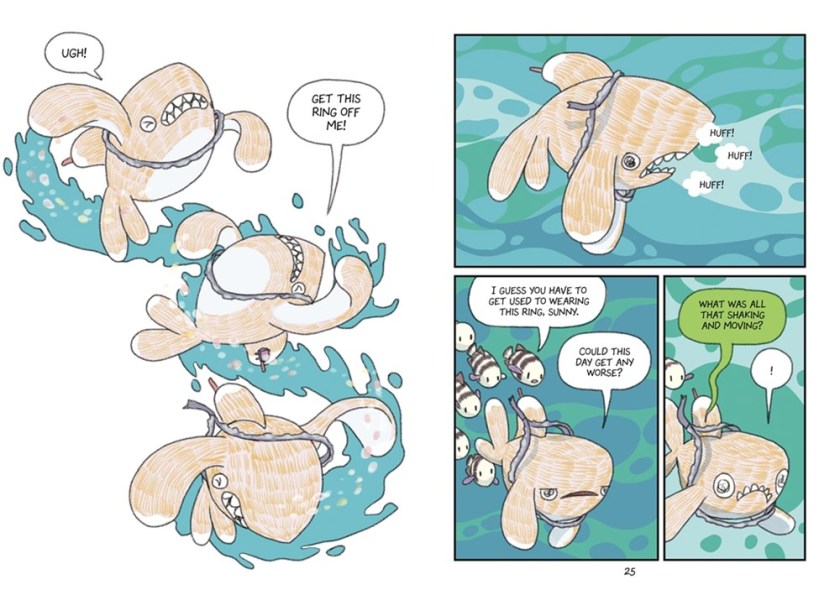 Each of these stories is such a strong statement on how humans are failing as stewards of the planet, yet filled with hope and awareness of how we can also be the change that puts things back in balance. Remy Lai creates characters that have much in common with readers, to foster a relationship between kids and the planet, and them empowers them with simple, powerful ways to bring about change. The Surviving the Wild series is a must for your graphic novel collections.

If you haven’t yet read and enjoyed Remy Lai’s books, you really must. She has a wonderful way of looking at life, whether it’s finding a way through grief by making cakes (Pie in the Sky), or striking out on one’s own to prove their independence (Fly on the Wall). Her newest book, Pawcasso, is about a lonely girl and a neighborhood dog with a shopping basket who quickly garners a fan club.

Jo is an 11-year-old girl who has trouble connecting with new friends. As she stares out her window, she’s drawn to a neighborhood dog who trots around, shopping basket in his mouth, stopping at stores and picking up groceries. Everyone seems to know the pup, and, intrigued, Jo follows him, to try and figure out where he lives. People from the neighborhood see Jo following “Pawcasso”, as he’s become known, and assume she’s his owner: chaos ensues as Jo just kind of allows everyone to believe Pawcasso is her dog, including the neighborhood dog catcher, who’s on Pawcasso’s trail after receiving complaints about an unleashed dog in the neighborhood. Jo finds herself in an uncomfortable middle as she’s caught in her own lie, and may have to come clean and risk the new friendships she’s formed, in order to keep Pawcasso from going to the pound.

Remy Lai’s artwork is here in full color, and she brings Pawcasso, Jo, and their little neighborhood to life with friendly, colorful panels. The story will appeal to a wide range of readers, from dog- and pet-lovers, to graphic novel and realistic fiction fans, to readers looking for a good story about friendship, family, and fun.

Pawcasso has starred reviews from School Library Journal, Booklist, and Shelf Awareness. Visit Remy Lai’s author webpage for more about her books and to sign up for her newsletter!

My middle grade TBR read-down continues with two more great books, both realistic fiction: Squint, by Chad Morris and Shelly Brown, the duo that gave us Mustaches for Maddie; and Pie in the Sky, by Remy Lai. Let’s dive in! 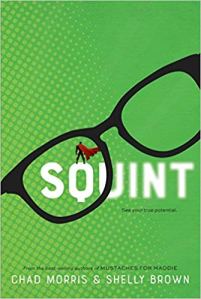 Flint is a middle schooler who loves to draw and loves superheroes. He’s creating a comic starring his kinda sorta superhero alter ego, Squint, who fights the villains who used to be his buddies, with the help of his rock dog. Flint’s been nicknamed Squint by his former best friend, because he has keratoconus, an eye disease that could leave him blind. Raised by his grandparents, Squint copes with his frustration through his comic, but when he meets McKell – a Filipina with a terminally ill brother who puts up YouTube challenges, daring others to live the life that he can’t – he may just have made a real friend again, after all.

Squint is a beautifully written book of grief, loss, and coping. It’s as much McKell’s story as it is Flint’s, and Chad Morris and Shelly Brown have created another sensitive, compelling story about kids coping with illness, and about the adults who are there to shepherd these kids through the heavy stuff. Flint’s grandparents have had to raise their grandson because their daughter couldn’t; they’ve given Flint the best they could with what they’ve had, and they’ve been the ones to see him through the multiple doctor appointments, and, now, surgery. McKell’s parents are working through grief and loss, and sometimes, that takes a toll on their daughter. Flint and McKell find in each other someone who may not understand, but who gets it, if that makes sense. They push each other to be their best, and when they combine their talents – Flint, with his art, and McKell, with her rhyming and songwriting – they shine.

Squint is a great addition to your middle grade fiction collections. It’s got realistic characters with strong backstories, and deals with real world issues like abandonment, grief, loss, illness, and navigating the aggravations of middle school.

Twelve-year-old Jingwen, his younger brother, Yanghao, and his mother leave China for Australia, but this wasn’t the original plan. They were supposed to move to Australia with Jingwen’s and Yanghao’s father, so he could open his dream bakery, Pie in the Sky. But Jingwen’s father died in a car accident almost two years ago, and Jingwen is wracked with guilt over events leading up to his father’s death. When they arrive in Australia, he feels like everyone around him is speaking Martian, but that he’s the alien – especially with little Yanghao seems to fit right in, quickly learning English and making friends. To deal with his grief and his frustration with his new life in Australia, Jingwen decides he’s going to make all the cakes he and his father talked about making for Pie in the Sky. Yanghao is only too happy to have cake every night, and Jingwen sets to work while his mother works. After all, cake makes everything better, right?

I LOVED Pie in the Sky. It’s a graphic novel within a novel, with 2-color illustrations on almost every page, that keep the action moving and keep readers invested in the story. When Jingwen tells readers he feels like an alien, we see that he’s an alien! He’s drawn as an alien for every time someone can’t understand him; on the occasions where he successfully speaks a word or two of English, a fourth eye will disappear, or something else will make him slightly more human. But all around him, people speaking English – including his brother and mother – may as well be an alien language, something we see as Remy Lai brilliantly illustrates a single word here and there, surrounded by alien glyphs in speech bubbles. Remy Lai creates a moving story about a family working through grief and loss, but each seem to be in isolation, when they need to come together to move on. Jingwen’s fear and frustration at being in a new country, speaking an unfamiliar language, comes across through prose and illustration, making him even more likable and empathetic. Jingwen and Yanghao have an realistic sibling relationship, with ups and downs, general silliness, and the love the always manages to shine through. Kids will love how they call each other – and anyone who annoys them, really – a “booger”.  Pie in the Sky works as a humorous and touching look at a family working their way through a tragedy. The tasty recipe at the end encourages families to bake together – because cake really does make everything better.

Pie in the Sky has a starred review from Kirkus.