The Witch King, by H.E. Edgmon, 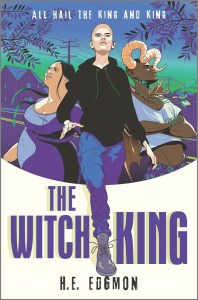 Wyatt Croft is a witch on the run. Originally from the fae kingdom of Asalin, Wyatt – a transgender 17-year-old boy – escaped a past loaded with trauma and abuse, finding home and family in our world. That all changes when Wyatt’s fated mate, the fae prince Emyr, shows up and demands that Wyatt return with him to fulfill his role as Emyr’s husband and take the throne of Asalin. Wyatt reluctantly returns to Asalin, with his best friend, Briar, in tow, and learns that relations between witches and fae are heading toward revolution – and Wyatt, who’s trying to resolve his own conflicted feelings about Emyr – is right in the middle of it. An anti-fascist, queer fantasy with incredible worldbuilding and characters you’ll love – and love to loathe – The Witch King has it all: romance, high fantasy meets contemporary fiction, and a wicked sense of humor. There’s powerful storytelling throughout The Witch King: being trans isn’t at the heart of the hatred toward Wyatt; transgender and nonbinary characters are major characters in the story, but Wyatt’s being a witch is the issue. The abuse and abandonment of witches takes the place of being LGBTQ+ in our society here, allowing readers to both see a functioning society where diversity is embraced in theory, but in practice, it’s very different. Sound familiar? Revolution, reform, and the idea of burning everything down to rebuild make The Witch King one of the most readable, relevant novels you’ll read this year.