You know that TBR that just keeps growing? Well, I’ve got one of those on my computers, too: yes, plural. My work PC, my laptop, my backup laptop… I see exciting looking graphic novels, I download them, and they join the TBR club. When I get a chance to read them, I want to talk about them, because they’re seriously good books, and we all know, it doesn’t matter when the book is published, right? So here, I present some graphic novels you may have missed the first time around: add these to your own TBR.

Three quirky sisters, one big secret: the first volume in The Grémillet Sisters series introduces readers to Sarah, Cassiopeia, and Lucille, three sisters with very different personalities. Lucille, the youngest, is an animal lover who spends most of her with the family cat or caring for strays; Cassiopeia lives with her head in the clouds, with princes and castles, and Sarah, the eldest, has strange dreams of trees and jellyfish. When she asks their mother about her past – a past the girls know almost nothing about – their mother becomes snappish and preoccupied, leading the girls to investigate, and discover a mysterious photo where their mother appears pregnant. But which sister is she pregnant with, and why was the photo hidden away? Originally published in French in 2020, Sarah’s Dream is lushly illustrated, with deep colors and gorgeous lighting throughout. The sisters have defined personalities have a realistic relationship with relatable ups and downs: Sarah, as the eldest, bosses the other two around; they go from being a cohesive “Three Sisters Club” one minute to never wanting to speak to each other again, the next. A good supplemental choice for middle school graphic novel collections. Content warning for pregnancy loss. Currently available as an ebook, it’s a purchase to consider if you have strong electronical graphic novel collections.

This modern-day update of Charlotte Brontë’s classic Jane Eyre, spins the story into a thriller about a nanny, her young charge, and the mysterious businessman, Rochester. Jane is an orphaned girl when she ends up on her aunt and uncle’s door; she scrimps and saves until she has enough money to leave the home that never had room her  in Massachusetts and heads to New York City, where she has secured a scholarship at an arts school. To earn some cash and keep the scholarship, she takes a job as a nanny to a young girl named Adele. Adele’s father, Rochester, is a seemingly unapproachable, uninterested father until Jane confronts him about Adele’s withdrawn behavior in school. As Rochester begins coming down from his ivory tower and taking on a more active role as Adele’s father, Jane also sees that he’s a man with secrets – secrets he’s not willing to bend on. But the two fall for one another, and Jane worries that Adele’s life – and Jane’s own life – may be on the line. Part thriller, part romance, award-winning screenwriter Aline Brosh McKenna’s take on Jane Eyre uses the source material as a jumping-off point for a new reimagining, with great success. You’ll notice bits of the original Jane Eyre peeking out in the earlier part of the story, along with some moments that will make readers familiar with one of McKenna’s movies, The Devil Wears Prada, smile with recognition. The artwork is moody, enhancing the overall atmosphere of the story and never quite letting the reader – or Jane – relax; it moves from murky, as Jane recalls her childhood memories, to stark and shadowy, as the story moves into a modern noir. I’m really happy about this new take on a classic favorite; into my library shopping cart it goes.

Aline Brosh McKenna is the award-winning screenwriter of The Devil Wears Prada, and Crazy Ex-Girlfriend. This is her graphic novel debut. Illustrator Ramón K. Pérez is the with Eisner Award-winning illustrator of Jim Henson’s Tale of Sand. The book received the Will Eisner Comic Industry Awards Nominee for Best Publication for Teens (ages 13-17) & Best Penciller/Inker or Penciller/Inker Team (for Ramón K. Perez) (2018).

Take five science and candy-loving friends, a dose of STEM/STEAM, and a group of uber-over-achievers to go up against for the all-city science fair, and you’ve got the NS3: the Not-So Secret Society. This group of middle schoolers needs a project that will wow the judges at the science fair, and they come up with one when they create a machine that can bring candy to life! Their test run brings an adorable gummy bear to life, but Gummy has a sweet tooth that won’t quit – and neither will the growth spurts that follow! The NS3 has to track down Gummy, who goes on a sugar-eating rampage, before it’s too late, and they still have to make it to the science fair on time! This is an hilarious story of friendship, science, and candy, starring a group of middle schoolers that readers will love: Madison, the bookish one; Aidan, the inventor; Emma, the licorice-obsessed artist; Dylan, the comedian, and Ava, the tiny wrestling fan with a big temper. Readers who loved Eleanor Davis’s Secret Science Alliance will enjoy this comic. I just want to know why three years have passed without a new adventure! Back matter includes a parent reading guide and learning activities, along with Common Core standards info. Unfortunately, the website for the NS3 doesn’t seem to be up at the moment, but in the meantime, try some safer candy experiments in the spirit of the NS3, with no risk of giant gummy bear attacks. This Pinterest board never disappoints – I’ve made the candy slime with my library kids, and I’ve made the Ziploc bag ice cream with my own kiddo. If you want to go old school, show them a few episodes of the early 2000s cartoon, Codename: Kids Next Door.

I can’t believe I’ve never written about Mouse Guard. One of the first graphic novels my now 21-year old son enjoyed, Mouse Guard is the award-winning, fantastic tale of a group of mice and the predators they must always be on guard against. It’s Dungeons & Dragons, Tolkien-esque fantasy for children and a perfect stepping stone to the Redwall series by Brian Jacques. Breathtaking high-fantasy, medieval artwork is the hallmark of the series, and this abcedary showcases beautiful illuminated manuscript artwork for each letter of the alphabet, incorporating elements from the Mouse Guard series, and rhyme in pentameter. If you’re like me and want to introduce your Kiddos to fantasy at an early age, concept books like this are gold. Psst.. there’s a coloring book and a roleplaying game available, too. 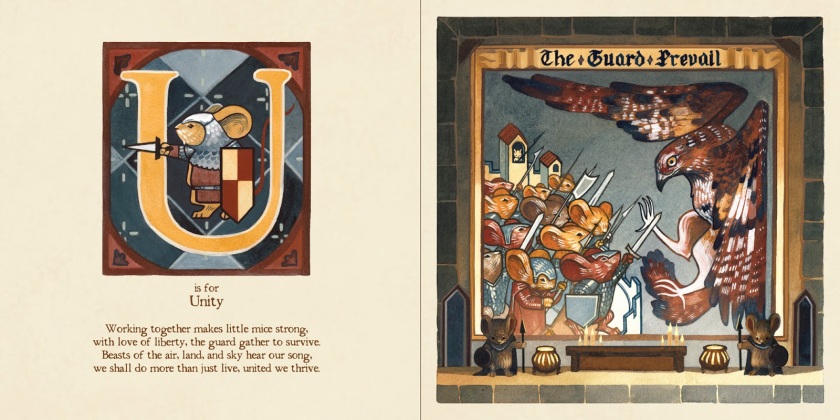