Hi all! I gave myself a mental health break for the holidays. I didn’t get anything done around my home, as I’d hoped, but I did take a break, knit, and read for a bit, and it was nice. I hope you all had warm and happy holidays, and are safe and well. Let’s finish this year strong and look forward to a better 2021.

In the meantime, I’ve got some graphic novels to crow about.

The Great Gatsby is getting lots of graphic novel love lately; Fred Forham’s vision was a 2020 CYBILS graphic novel nominee. K. Woodman-Maynard’s envisioning of the Fitzgerald classic is much more surreal, with dreamlike watercolors and narration blended into the background: Nick’s words wander around rugs and through lightbulbs, run over sidewalks, and curl into cigarette smoke. The story of Jazz Age love and murder feels like a series of beautiful watercolors, but a large chunk of the story is missing, making this hard to follow for readers who haven’t read the original story. In her author’s note, Woodman-Maynard even states that she was excited by the metaphors in the story, and it was not her intent to be “an exact literal interpretation of the novel”. As a surrealistic exploration and companion to the original, Woodman-Maynard’s book certainly provides a compelling look. Get a look at a chapter excerpt here, thanks to publisher Candlewick.

First, I have to make a huge apology here: I was invited to a blog tour for Beetle back in August, which also happened to be a point where things were falling apart here, and I blew the date. I am still embarrassed and mortified, because I really work to keep to things like that. So I hope this post makes up, in some way, for the oversight. That said, Beetle & Hollowbones is adorable! A homeschooled goblin-witch named Bettle befriends Blob Ghost, a blobby ghost that inhabits space at the local mall in the town of ‘Allows. Blob Ghost – or, BG, as Beetle calls them – is relegated to the mall, so Beetle happily visits, and is sad when she has to leave. Beetle’s old friend Kat shows up for a sorcery apprenticeship with her intimidating Aunt Hollowbone, and Beetle is fascinated: Kat’s cool, she’s social media famous, chic, and great at magic, to boot. The two start spending time together, to BG’s disappointment, but when Aunt Hollowbone’s awful plan to raze the mall becomes public news, Beetle realizes she has to save BG and find a way to release the mall’s hold on them.

A story about friendship, doing the right thing, and standing up for yourself, Beetle & The Hollowbone’s illustrations are beautiful and vibrant, with adorably creepy creatures that I could easily envision in an animated series. This is the kind of story my library kids love: warmth, family, and friendship, with some magic to infuse the tale.

Beetle and the Hollowbones has starred reviews from Kirkus, School Library Journal, Publisher’s Weekly, and Booklist. It is also a CYBILS 2020 Graphic Novels nominee.

Narrated by the historical Italian astronomer Galileo Galilei, Galileo! Galileo! is the story of NASA’s mission to Jupiter. We get a brief recap of Galileo’s life, for an understanding of why the mission bore his name; the narrative then moves into a comprehensive, illustrated lesson on the history of aeronautics and space missions. Holly Trechter’s time as a NASA Ames History Archives intern provides great insights, including a peek at Carl Sagan’s letter-writing campaign that saved the Galileo after budget cuts by the Reagan administration. Holly Trechter and Jane Donovan make Galileo Galilei a cartoony, amiable character who explains the science and politics of space travel in friendly, understandable terms, and the artwork is colorful and includes diagrams, maps, and colorful illustrations. Back matter includes discussion questions. Give this to your Science Comics and History Comics readers for sure. Galileo! Galileo! is a CYBILS 2020 Graphic Novels nominee. 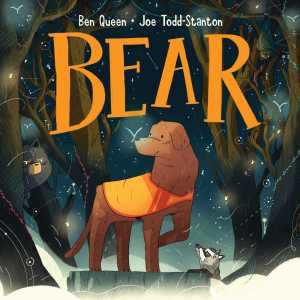 This is another CYBILS 2020 Graphic Novels nominee that I really enjoyed. An original graphic novel from Pixar writer Ben Queen and illustrator Joe Todd-Stanton and published by BOOM! imprint, Archaia, Bear is the story of the relationship between a guide dog and his human. Bear is service dog who lives with Patrick, the blind man he takes care of. Bear and Patrick are happily living together, but when Bear suddenly loses his vision; he worries that he’s lost his purpose. He gets separated from Patrick while trying to get advice from a raccoon, on getting his vision back, and ends up on a grand adventure where he’ll meet bears, run through the streets and subways in Manhattan, and try to find his way back to Ulster Country. Bear is gentle and noble; he will do anything for Patrick, and in turn, Patrick will stop at nothing to find Bear. I loved the relationship between these two, and I thoroughly enjoyed the raccoons, largely played for comic relief, and Stone, the bear who takes it upon himself to keep Bear safe on his travels. The story is also a positive portrayal of a blind character: Patrick repairs vending machines, is a passionate reader and “a decent athlete” who applies for a guide dog in order to pick up more machines on his service route; he hears that having a guide dog will allow him to travel faster than walking with a cane.  The book also gently corrects ableist language; when Patrick mentions having a “seeing eye dog”, the trainer responds that they are called “guide dogs”.

Beautifully illustrated with gentle colors and empathetic characters, Bear will make my graphic novel  shelves when we reopen. Until then, I’ve handed this one to my Kiddo. Results to come.

Twin sisters Maureen and Francine share a room and a life, but starting sixth grade is BIG. Francine, the more extroverted, can’t wait for the chance to start meeting new people and having new experiences, but Maureen is more introverted, more hesitant. She misses dressing like her twin, and she’s really not thrilled that she has no classes with her; when Francine starts calling herself “Fran”, Maureen doesn’t know who this alien who took off with her sister is! Maureen is also intimidated by her school’s Cadet Corp, especially her instructor, Master Sergeant Lucinda Fields. Maureen, the straight-A student, is frustrated by her difficulty in getting marching in formation down and the overwhelming experience of middle school, so discovering that Francine and their parents were behind the decision to put the girls in separate classes AND enroll Maureen in Cadet Corp makes her take action: she decides to run against her sister in the race for Class President. A story of growing up and facing adolescence with all its challenges, Twins features main characters of color in a strong family and a relatable story that anyone with siblings – and close friends – will recognize. It’s hard enough growing apart from one’s best friend, but what happens when that best friend is your sister – and a person you share a friendship group with? I loved the story, the relationship between the sisters and the relationship between family members, the realistic frustration of sharing friends when you have a falling-out, and the challenges of taking on new experiences. Give to your Varian Johnson readers and your graphic novel fans that loved the Invisible Emmie, Becoming Brianna, New Kid, Class Act, and the Nat Enough books.

One thought on “I’m back with more graphic novels!”