Count this as a subset of my running Books From Quarantine posts. I’ve been stressed out thinking about my second grader, soon to be rising third grader, this summer, when half of his school year has consisted of less homeschooling than crisis management. I want to find things for my kiddo to read and enjoy that give him a little bit of each of his subjects, you know? I know you know. So consider these Summer’s Cool posts as my way of sharing some bookish and Web-ish things I find along my way. Today, I’m talking History Comics, a new nonfiction graphic novel series from First Second; the imprint we know and love that’s given us Science Comics and Secret Coders. 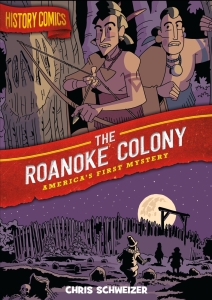 Before the pilgrims set foot on Plymouth Rock; before Captain John Smith landed at Jamestown, the first English settlers arrived in what we now call the United States, on Roanoke Island. Colony governor John White returned to England to get supplies for the colony, but we delayed for three years. When he returned, the colony was abandoned; the settlers, gone. No trace. It’s one of the biggest mysteries in American history, and Chris Schweizer investigates in this History Comic.

Similar in format to Science Comics, we get two guides through the story: in this case, Wanchese a Roanoke Indian, and Manteo, a Croatan chief, inspired by the actual Native Americans who met with the settlers and Sir Walter Raleigh in the earliest days of the settlement. At once a history of the Roanoke Colony and the politics behind its settlement and a discussion of Native Americans and the settlers’ condescending treatment of them from the beginning, The Roanoke Colony is an historical mystery filled with explorers, pirates, jealous queens, shady businessmen, and a brewing war. Very readable and with cartoon-realistic illustrations, this will enchant a new generation of budding historians the same way In Search Of pulled me in when I was a kid. The book examines theories, some plausible and some… well, out there, that persist as people try to work out what happened to the colonists at Roanoke. An afterword from the author on what we know about Roanoke includes a discussion of primary and secondary sources: hugely helpful when working on research reports!

For more information about Roanoke, check out The First Colony Foundation, a nonprofit dedicated to research and public education. Education site Ducksters has a unit on the Roanoke Colony. And DreamWorks TV has a YouTube channel, Peacock Kids, that’s also published a Roanoke mystery video. 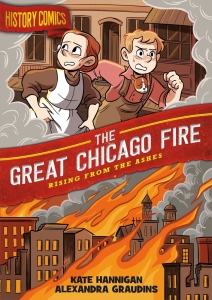 In October of 1871, a fire started in the city of Chicago and burned for two days, destroying homes, taking lives, and causing millions of dollars in damage. It’s become a moment in history and an American legend. The story of the Chicago Fire is told here, through the points of view of two siblings, Franny and John Patrick (JP), as they search for their parents in the midst of the fire and the chaos that erupts. It was a disaster that made an urban legend out of a woman named Catherine O’Leary: the fire began about 10 blocks from her home, leading anti-Irish residents to lay the blame on her and her cow; stories ranged from the cow kicking over a bucket while being milked to one of O’Leary’s renters hosting a drunken party which resulted in a lantern being knocked over. These theories, and more plausible ones are covered here, as Franny’s and JP’s story progresses.

Back matter includes a timeline of the fire, a map of spots mentioned in the story, a section dedicated to fire sites to visit in Chicago, a list of fast facts, and a bibliography and resources for further reading. Rising From the Ashes is a comprehensive, thrilling retelling of a major moment in American history.

For more Great Chicago Fire resources, point your browser to The Great Chicago Fire and The Web of Memory, a joint project with the Chicago History Museum and Northwestern University Information Technology (NUIT) Department of Academic and Research Technologies (A&RT), and supported by the Guild of the Chicago History Museum. It’s got a wealth of information, including stories from eyewitnesses, image galleries, songs inspired by the fire, and excerpts from media and personal correspondence. The History Channel has a section about the fire; Smithsonian magazine has an article on the Mrs. O’Leary myth; education site Ducksters.com has a section on the fire, and so does Kids Britannica. 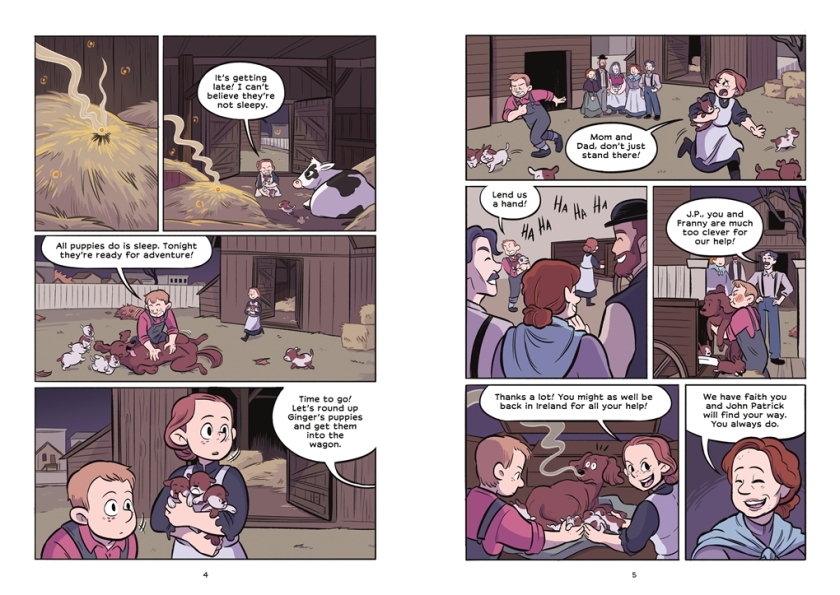 Booktalk these to your I Survived readers – they will eat these up (especially with I Survived graphic novels also hitting shelves). There is an I Survived the Great Chicago Fire chapter book available, so make sure to have a copy handy (cross-promotion is everything)!

One thought on “Summer School? Summer’s Cool! Books to read with your kids this summer: History Comics”