I’ve been diving into my graphic novel stash with renewed vigor for the last couple of weeks, and DC is dominating the kids and YA original graphic novel front. Every single one I’ve read has been unputdownable, and there are some brand new characters introduced to the universe that I hope, hope, HOPE we see again, because I know my son devoured these books and that my library kids will gobble them up and ask for more. So let’s check in with DC. 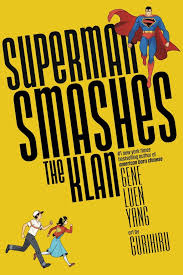 Inspired by a 1940 radio serial, award-winning author, artist, and former National Ambassador for Children’s Literature Gene Luen Yang takes on white supremacy and hate, with a little help from Superman. It’s 1946, and the Lee family – scientist Dr. Lee, his wife, and children, Tommy and Roberta – are moving from Chinatown into the Metropolis suburbs. While Dr. Lee and Tommy are excited about the move, Roberta and her mom are a little more reluctant. Dr. Lee pushes his wife to speak English and Tommy wants to fit in with the local kids, while Roberta and her mother are nervous about their English and miss the familiarity of Chinatown. Shortly after the family moves in, a group calling themselves the Clan of the Fiery Cross starts a reign of terror in the neighborhood, burning a cross on the Lee’s property. Police Inspector Henderson of the Metropolis police – an African-American man – gets involved, as does ace reporter Lois Lane. As the Clan increases their attacks on the Lee family, Superman shows up, too. But the Superman here is not the Superman we know and love just yet: he’s a man still learning about his powers and his heritage. When Superman reconciles who he is – Martha and Jonathan Kent’s son – with the discovery that he is also Kal-El from Krypton, all of Metropolis is in for a valuable lesson.

There’s so much going on here: strong subplots contribute to the main storyline of a white supremacist gang attacking a family and a town; we have Superman’s growing awareness of his power and the fact that he, too, is “not from here”, but “passes” because he’s a white male; Roberta, Lois Lane, and Superman working together to uncover the Clan before tragedy strikes; Tommy’s struggle to fit in; an illustration of generational racism at work; and a sinister plot afoot. Gene Luen Yang infuses the story with moments from history and his own life, and his author’s note, “Superman and Me”, at the end of the book, is an 11-page look at Superman, his place in US history, racism in US history, and the author’s own family story. A bibliography is available for further reading.

Superman Smashes the Klan is imperative reading. Gene Luen Yang’s storytelling always makes for incredible reading. Gurihiru’s artwork gives us iconic Superman moments; he calls to mind Action Comics #1 in a page where he hoists a car over his head, Roberta standing next to him, as they face shadowy, pointed hoods brandishing torches, chains, and baseball bats. Young Clark Kent lets his powers take hold of him as he defends a friend, rising in the air and letting laser vision unleash itself.  He discovers his Fortress of Solitude, this time, underwater. The Clan of the Fiery Cross is horrific as they throw their hands high, welcoming a torch of flame in front of the Lee family home. So many powerful moments; he will make Superman fans out of every reader.

The Comic Book Legal Defense Fund has a free, downloadable discussion guide. Superman Smashes the Klan is a great choice for Social Studies, US History, and ELA reading groups. Keep an eye on The Brown Bookshelf if you were unable to watch the Kidlit Rally for Black Lives on June 4th; Gene was one of the authors who spoke, along with luminaries like Jason Reynolds, Jacqueline Woodson, and Kwame Alexander; the full recording will be posted soon. There’s a Q&A with Yang on We Need Diverse Books that you shouldn’t miss, either.