DC Ink and DC Zoom are putting out top-quality graphic novel content for young and tween/teen readers. I’ve been reading every copy I can get my hands on (when I can get the DC Zoom books out of my kid’s room), and I’m being blown away every time. This time around, we’ve got two new superheroes for the middle grade and tween setHere we go. 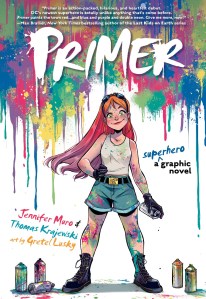 A brand new superhero! Ashley Rayburn is a 13-year-old with a criminal father in jail. She’s bounced from foster home to foster home, but her upbeat spirits have been rewarded when she’s placed with Kitch and Yuka Nolan, who provide a warm, kind atmosphere for her to live. Yuka is a little weird, little secretive, but Kitch tells Ashley not to sweat it. Turns out, Yuka works for a lab, and brings home a super-secret experiment: body paints that grant different superpowers. Ashley can’t resist the chance to play with some paint – hey, Kitch is an artist and encourages her to use his studio, after all! – and makes some very big discoveries! With her new BFF Luke, Ashley starts dabbling in her newfound paints and powers and takes to the skies as Primer, a new superhero. Unfortunately for Ashley and her new folks, the shadowy government agency that commissioned those body paints want them back at any cost. Primer’s going to have to do a lot of color wheel work to keep herself and her new family and friends safe.

Loved this story. It’s so upbeat, loaded with laughs and adventure, and has an intriguing subplot involving Ashley’s bad guy dad. There are great DC touches throughout the book, so keep an eye on the artwork, which explodes with color and movement. The ending leaves an opening to a possible sequel, and I hope we get one; my library kids are going to devour this one and ask for more. Primer is great summer reading fun. 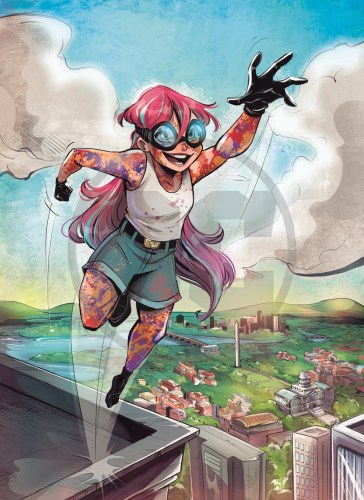 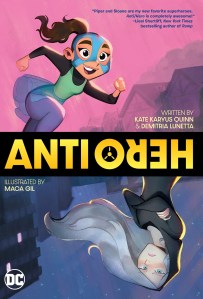 Next up, a book that came out in April and really needs to get a signal flare, because the world’s events stole some of this book’s thunder. Antihero also introduces two new superheroes for middle grade readers. Piper Pájaro and Sloane MacBrute are two 13-year-olds in the same school, share some of the same classes, but are two very different people. Piper is easygoing, athletic, not a big fan of classwork, and she’s scary strong. Sloane is super smart, not a big fan of athletics, and comes from a family with a bad history. At night, Piper puts on a tutu, a leotard, and a mask and patrols the city, on the lookout for evildoers, while Sloan dons all black (she’s always wearing black, tbh) and commits crimes at the behest of her gangster grandfather, The Bear. The two come together when Piper tries to protect a device that Sloan needs to steal, and a mishap results in the two switching bodies. They learn about each other’s lives as they fake it to make it.

The story is fun, with loads of humor and presents the Sloane and Piper as total opposites: Piper wants to be a superhero more than anything else; Sloane wants to work with scientists. While Piper lives with her loving, cuddly grandmother while her scientist parents are away on assignment, Sloane Sloane is at the mercy of her grandfather so that she can care of her ailing mother. Piper dresses in bold, bright colors that work with her cheery outlook; Sloane favors an all-black wardrobe that matches her serious, all-business attitude.

Both kids are relatable, the body-switching storyline is played for laughs, and we get the value of teamwork. And there’s a cameo that made me squeal like the fangirl I am. Grab Anti/Hero for your middle graders and tweens, and make sure we get a sequel. 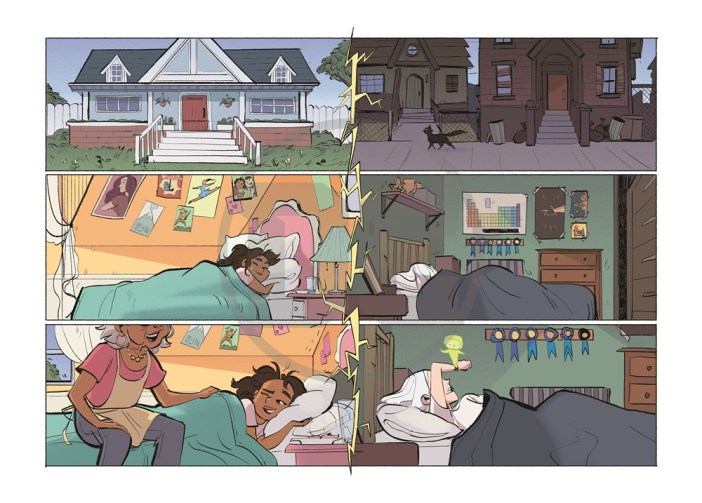