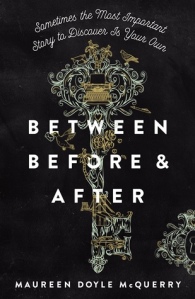 Told in two narratives across two timespans, Between Before & After is the story of Elaine, a girl raising her younger brother, Stephen, after losing her mother and baby sister to the 1918 Influenza Pandemic and her grief-stricken father to a drunken brawl, and Elaine’s teenaged daughter, Molly, as she tries to unravel her mother’s secret past. The narratives shift between fourteen-year-old Elaine’s story from 1918-1920, and Molly’s in 1955. Molly sees her journalist mother as an enigma, going so far as to create a “biography box” to hold clues to her mother’s story. Elaine’s story is a heartbreaking one, beginning with her mother and baby sister dying, and her father’s spiral into alcoholism and neglect and ending with his death. When Elaine finds work reading to a blind man in a wealthy family, she is relieved at being able to support her and her brother, but a turn of events separates Elaine and Stephen. In 1955, past and present converge when Stephen finds himself at the center of a religious controversy that shines a spotlight on the family.

Between Before and After is a solid piece of historical fiction that examines social class and mental illness. The subplot involving Elaine’s brother Stephen was interesting, but only served a small plot forwarding device for Elaine’s – and, to a degree, Molly’s – story. The characters drew me right in, and anything about New York in the early 20th Century gets my attention. I enjoyed Maureen Doyle McQuerry’s storytelling, especially Elaine’s story; she was a fully realized character.

If you have historical fiction readers, this is a good pick for you. There’s much to discuss about social class, stigma, and childhood poverty here, making this a good extension/book discussion choice for social studies/history classes.