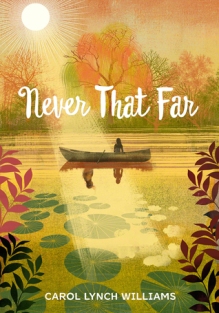 Twelve-year-old Libby is devastated when her best friend, her grandfather, dies at home. Crippled by grief, her father can barely get out of bed to work in the family’s Florida orange groves. On the night of Grampa’s funeral, though, Libby has a visitor: Grampa’s spirit shows up in her room, telling her that “the dead ain’t never that far from the living”, and that she has to search the lake for something he left for her. Sadly, he tells her that her father can’t see him; he doesn’t believe. To him, “the Dead are dead”. Libby joins forces with her friend, Bobby, to discover the treasure at the lake, but her father spirals further into grief and depression and threatens to derail Libby’s entire mission.

Never That Far has a touch of the supernatural set into a realistic fiction about grief, loss, and family. The Sight, Libby’s family gift, allows her to see and speak with dead family members. Her father has been worn down by grief, enduring the deaths of his siblings, wife, mother, and now, father; he has spent years arguing with his family about their “gift”, refusing to accept it for what it is. Libby’s revelation is unbearable to him, threatening an even greater rift between father and daughter when he tries to stop her from her mission. Together, Libby and Grampa, with some help from Bobby, work to save Libby’s father, who’s in danger of becoming a shell of a person and leaving Libby alone in the world.

The characters are gently realized, revealing themselves to readers little by little over the course of the book and packing powerful emotional punches as they come. Libby witnesses her grandfather’s grief at not being able to connect with his son in a scene that will have readers reaching for tissues. Taking place in the late 1960s in rural Florida allows the plot to remain character-driven. This is a moving story of grief, loss, and renewal that will appeal to certain readers: it’s a good book to have handy for your tough times lists, and for comfort reading. It’s spiritual, rather than overtly religious, and is soothing for readers experiencing loss and moving on.

One thought on “Never That Far: They never really leave us”