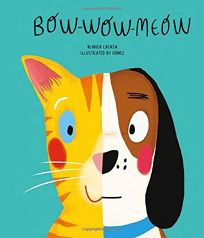 Fabio’s a dog that really isn’t into doggish things. He doesn’t play fetch, he doesn’t roll over to have his belly tickled, he doesn’t wag his tail, and he doesn’t bark. His family tries to teach him how to act like a dog: they throw sticks, they roll around on the floor, and they bark at him. Fabio is uninterested. One night, Max, a little boy in the family, discovers that Fabio is going out at night, and follows him: right into a group of cats engaging in very catlike behavior, from coughing up hairballs to playing cards (hey, are you with your cat 24/7?). Max can’t believe how happy Fabio is as he sharpens his claws, climbs drainpipes, chases mice, and bow-wow-meows along with his feline friends. The next morning, when Max’s parents try to get Fabio to act like a dog, Max quietly acknowledges Fabio, making him the happiest member of his family.

Recognition and visibility are important. When Max acknowledges Fabio, when he sees Fabio for who he really is, Fabio’s whole world changes; Max’s world widens that much more. Bow-Wow-Meow sensitively handles identity and diversity for young readers. By telling Fabio’s story using dogs and cats, kids are entertained and enlightened in a sweet, fun way that leaves the pathways open for discussion again and again. Gómez’s bold artwork is fun and expressive and will appeal to storytime audiences. Younger readers may struggle with some pages, where the black text is superimposed over a dark background.

I’d love to read this with Jules Feiffer’s Bark, George, for a good storytime on diversity and animals. You can also display and pair this with books like Morris Micklewhite and the Tangerine Dress, by Christine Baldacchino, or Jacob’s New Dress, by Sarah and Ian Hoffman. Mothering.com has a good article with recommendations for kids’ books that defy gender.