Gertie Reece Foy is a fifth grader on a mission. She lives in Alabama with her dad, who works on an oil rig, and her great-aunt, who loves her to pieces. But Gertie’s on a mission to be the GREATEST fifth grader: she’s got quite a few plans. See, she wants to go up to her absentee mother – who lives in the same town – and let her know that she didn’t need her after all. Only one thing is standing in Gertie’s way, and that’s the new girl, Mary Sue Spivey. Mary Sue has a Hollywood director daddy and seems to have the world on a string, and she and Gertie do not hit it off at all.

This is a quick read that middle graders will enjoy. Caldecott Honor artist Jillian Tamaki’s (This One Summer) illustrations really bring a gentle life to the characters, particularly the headstrong Gertie, who takes a little bit to love, no lie. Like most middle grade protagonists, she can get a bit caught up in herself, especially considering her circumstances. Her mom abandoned her family when Gertie was just a baby, yet lives in the same town. Gertie passes her mother’s house on the bus route to school every day, and by some crazy happenstance, she and Aunt Rae only bumped into her mother once while grocery shopping at the Piggly Wiggly. I was confused as to why someone would abandon her husband and child, yet stay in the same neighborhood to continue on with her life.

Gertie becomes much more sympathetic when Mary Sue’s mean girl act kicks into high gear. Mary Sue is a truly awful mean girl. The author tried to soften her and make her  more human at the end, but I wasn’t having it, nor was I having what appeared, to me, her mother sanctioning Mary Sue and her new mean girl clique’s behavior in targeting Gertie via a “Clean Earth Club” (Gertie’s dad works on an oil rig, and Mary Sue’s mom is an environmental lobbyist.) There’s some good diversity in the book, as you’ll see in the illustrations and the descriptions of some characters.

Entertainment Weekly is calling Gertie the “next Ramona Quimby”, and that’s a great starting point for display and booktalk/readalikes. Gertie’s Leap to Greatness is a good middle grade addition to collections where realistic fiction is popular. A story thread about oil rigs and the environment provides some good discussion topics.

There’s a Gertie webpage that offers some of Gertie’s Tips for Greatness, and illustrator Jillian Tamaki’s webpage has more artwork to enjoy.

Some pages from Gertie’s Leap to Greatness, courtesy of Macmillan: 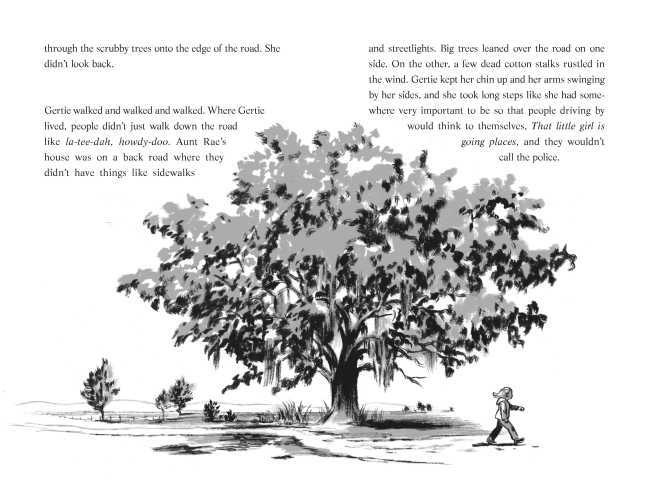