Readers met Izzy Gizmo, a little girl who loves to invent and create, two years ago. She’s finally back in Izzy Gizmo and the Invention Convention, where Izzy, Grandpa, and her best buddy, Fixer, are invited to Technoff Isle’s annual Invention Convention, where she’s up against other kids. They have to make a machine that will impress The Professor, and the winner becomes a member of the Genius Guild! Izzy’s ready to get down to business, but the obnoxious mean girl Abi von Lavish seems to be taking everything Izzy needs to create her invention – until Abi’s drill breaks and she discards it without a second glance. Fixer has an idea, but will Izzy see past her own frustration to understand?

Izzy Gizmo and the Invention Convention has all the fun and charm of the first book, with the added positive emphasis on making, repurposing, and recycling. In a time where Fix-It Clinics are popping up all over the nation – including libraries! – Izzy hits on a few important topics. Reusing and repurposing materials is the primary objective, but readers will also notice that while Izzy’s fellow competitors are using machines that eat up a lot of energy or cause pollution, Izzy’s using wind, manual (or bird), and solar power to make her Fix-It machine a success. And Izzy also speaks to readers about frustration, and how sometimes, our feelings can get away from us. She takes her irritation out on Fixer, only to be gently guided back in the right direction by Grandpa. The pencil, ink, oil pastel, monoprint, and digital illustrations are bright and give a real feel for the hustle and bustle of a science fair, with lots of movement and activity packed into each page. Perfect for Science Fair season and beyond, Izzy Gizmo and the Invention Convention is fun reading with smart lessons for all. Publisher Peachtree has free, downloadable activity sheets and a teacher’s guide available.

Chilly DaVinci is a penguin who’s not like the other penguins on his iceberg home, DaVinci. He builds things while the others do more “penguin” things. But his machines don’t always work, so when his latest contraption cracks the ice and puts the group in danger from a nearby orca, Chilly knows he has to make things right. After some trial and error, and taunting from Chilly’s nemesis, Vinnie, Chilly manages to save his group and land them safely back on Vinci. Chilly’s inventions are inspired by Leonardo DaVinci’s inventions, including a flying contraption. An afterword reminds readers to think about the process rather than the reward, like DaVinci, and to think outside the box (or ‘berg).

Chilly DaVinci is inspired by Leonardo DaVinci, with sepia-toned blueprints paced with the penguins story. The storyline itself is a little jumbled, with side conversations and random thoughts popping up throughout the text; readers may tangent off on these. The watercolor-style artwork makes for cute penguins, and DaVinci is especially wide-eyed and rocks a pair of giant glasses, giving him an egghead-type of nerdy cool.

Better for independent reading than storytime, but fun for penguin fans. 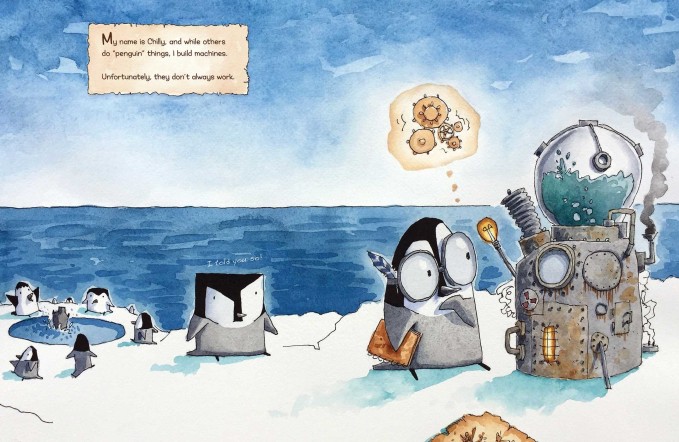 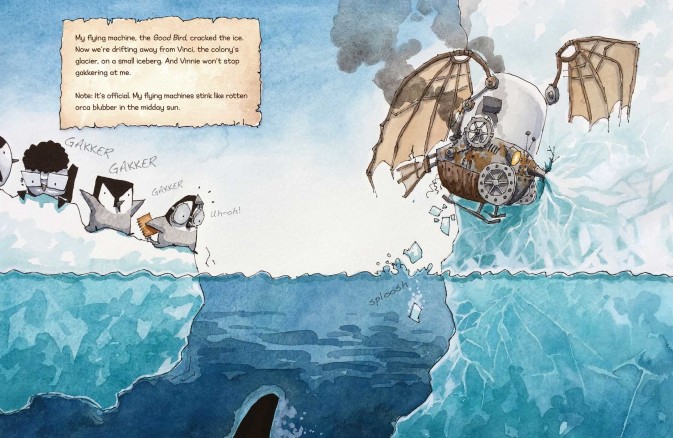 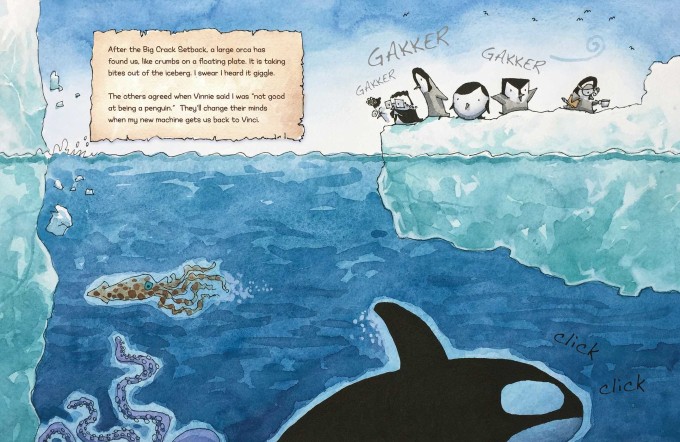 Kids love Band-Aids, right? My kids have all come to me, asking for a fistful of Band-Aids for some nearly invisible wound. I remember covering my own teddy bears with Band-Aids when I played with my doctor kit. Working around books and paper as much as I do, I can tell you that there have been days where I’m walking around with two or three of the suckers on various fingers, especially when I’m doing program prep and put literal blood, sweat, and tears into a project I’m working on for the kids. Whether they’re the original plain, or decorated with Transformers, Band-Aids are a great example of an invention that fills a need and became so much more – so how did this happen? 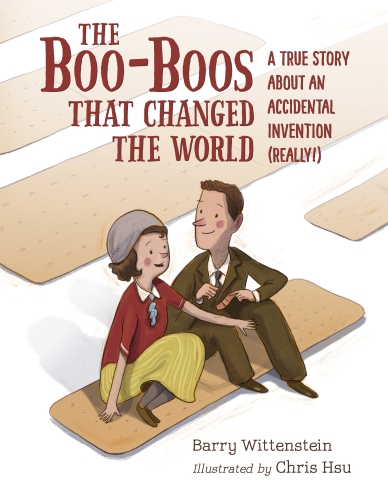 In the 1920s, a cotton buyer for Johnson & Johnson named Earle Dickson married Josephine, settled in New Brunswick, New Jersey, and started their lives together. But Josephine was a bit accident-prone; she’d cut herself while cooking, bumped and bruised herself going about her daily business, you get the drift. (C’mon, though: who hasn’t grated knuckles, fingernails, and the occasional fingertip on those savage cheese graters?) Poor Josephine was going through dishrags at an astonishing rate, and Earle, being the loving husband he was, started looking for solutions. He took a long piece of adhesive tape and stuck sterile gauze to them every few inches: voila! The Band-Aid prototype was born! The bandages evolved for easier and quicker application and were made easier to apply and reached worldwide usage, going overseas during World War II to the soldiers fighting in Europe, even as kids were testing their limits with scratches and cuts at home. The End. (Really.)

I enjoy a good nonfiction book I can give to younger readers; I’ve had big success with everyday inventions like hot chocolate and earmuffs, thanks to Easy Readers on the topics, and Boo-Boos is a great addition to younger nonfiction collections. Big enough to spotlight the mixed media and Photoshop artwork, all of which is sepia-toned to give a real vintage-y feel to this story. I love the Band-Aid endpapers that bring you in and escort you out of the story, and the sweet love story at the heart of this invention story is just adorable. I love the kid-like narration, which starts and stops with each major moment: “The End. Actually, no, wait…” It’s like listening to my own 5 year-old, or any of my library kiddos, describing a movie, big happening at school, or family event. There’s an author’s note, Earle Dickson time line, a timeline of medical inventions from the 1920s and 1930s, and a list of further resources for anyone who wants to learn more.

The Boo-Boos That Changed the World is good reading, and just good fun. Hand out some Band-Aids (licensed characters, please, we’re not cruel) at a storytime, or raffle off a box of them for a great reader report! There’s a downloadable curriculum guide on the way, and you can listen to a Charlesbridge podcast interview with author Barry Wittenstein right here. The book has a starred review from Kirkus.

Want a shot at your own copy of Boo-Boos? Enter this Rafflecopter giveaway! (US addresses only, please.)

Author Barry Wittenstein has always been involved with writing, from contributing to his high school and college newspapers, to writing and performing poetry on stage in San Francisco, songwriting, sports writing, and now picture books. He has worked at CBS Records, CBS News, and was a web editor and writer for Major League Baseball. He is now an elementary-school substitute teacher and children’s author.

Barry particularly likes nonfiction, and profiling mostly unknown people and events whose stories have never been told in children’s literature. He is the author of Waiting for Pumpsie and The Boo-Boos That Changed the World. He lives in New York City. To learn more, visit his website: https://onedogwoof.com/ or on Twitter: @bwittbooks

Praise for THE BOO-BOOS THAT CHANGED THE WORLD

★”Appealingly designed and illustrated, an engaging, fun story about the inspiration and inventor of that essential staple of home first aid.” — Kirkus Reviews (starred review)

Lily Leanchops is the daughter of famous inventor Hercules Fatchops, and she’s certainly inherited her father’s pioneering spirit. While the rest of the folks in Pigdom Plains scoff at the very notion of pigs flying, Lily’s been working on her own flying machine in secret. She’s seen her father’s flying machines fail, and she’s taking everything he’s doing into account as works to create her own flyer. Like her father, she embraces science, not magic (mostly), but when the dangerous Warthogs threaten to invade – flying their own machines, powered by magic, and led by someone very familiar with Lily and her dad – it’s up to Lily to save her home and her town. Even if that means pushing her experimental craft and herself to their limits.

The science versus magic dilemma takes center stage in this graphic novel, which will appeal to kids and, on a deeper level, to older readers who are aware of the science versus faith arguments that frequently occur splashed across social media. Although pigs are the main characters in the story, they are illustrated and given very humanlike qualities and dress – Lily could be another Amelia Earhart or Bessie Coleman in her pilot gear. An interesting parable for current events, with a plot that embraces diversity and working together. A good addition to middle school reading lists and libraries; invite readers to make comparisons between the story and what they see in the world around them and on the news.