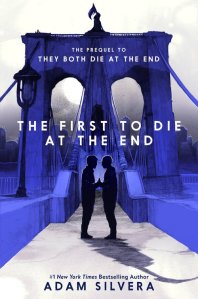 The prequel to 2017’s They Both Die at the End follows two teens who fall in love against the backdrop of New York City during the Death-Cast launch. Orion is a teen convinced he’s living on borrowed time thanks to his serious heart condition. He signed up for Death-Cast – an app that alerts subscribers on the day they are going to die – so that he would know when it was coming. Valentino just arrived in New York; a young model ready to take the City by storm, he signed up for Death-Cast on a lark after almost losing his sister to a car accident. The two meet and the attraction is instant: but one of them receives a call and the other doesn’t. Is Death-Cast real, or is it a hoax? The two don’t have time to mull it over; they have a day to create a lifetime. While it isn’t necessary to read They Both Die at the End before reading The First to Die at the End, you’ll want to. It’s a gorgeous story, and you’ll get a little more context from characters who make an appearance in this prequel. Using the space of one day, Silvera creates a story that is filled with expectation, joy, tension, and longing. His fully realized characters have no time to waste; they spend the most memorable day together, moving through relationship milestones and daring to to love in the face of the unthinkable. Thought-provoking discussions between the characters will translate well to discussion groups, and supporting characters and the connections made over the course of the day expand the Death-Cast universe and make this an unputdownable story that teens will devour. An essential first purchase.

Visit Adam Silvera’s author website for more about his books.