The hazy days of summer call for a good giveaway, and I’ve got one. Sit back, enjoy a nice, cool lemonade or iced tea, and look up in the sky (with sunglasses on, please). Do you see a sky full of birds? Or do you hear them in the trees around you? Good, now you’re in the mood for A Dream of Birds, by Shenaz Patel and Emmanuelle Tchoukriel.

Set on the African island nation of Mauritius, the story centers on Sara, a young girl who loves birds. They remind her of time spent with her grandfather, who had dozens of brightly colored birds flock to his yard every day, to put on “an incredible show” with their colorful feathers and personalities. As Sara is on her way to school, she sees a tiny house in a neighbor’s yard, and realizes that it’s a birdhouse, home to a flock of parakeets. The neighbor chases her away, but Sara is undaunted: she wants her neighbor’s birds to be as free as the birds that entertained her and her grandfather. Lyrical storytelling and bright digital artwork bring this story to life. The skies and water are deep blue, setting the stage for the brightly colored birds to showcase against. Loopy script calls reader’s attention to the names of different types of birds and their songs, from peeping and chirping to crooning and cooing. People and birds are rendered realistically; Sara and her grandfather are brown-skinned and the only human we see; other humans are in shadow or silhouette. Sara’s story is filled with longing: longing for freedom, longing for her grandfather; the artwork shows a loving relationship between the two, and she gazes wistfully at the birds in the cage, remembering him. Edwige-Renée Dro’s translation from the original French reads beautifully in English, and makes A Dream of Birds a good readaloud choice. A nice purchase for collections.

A Dream of Birds was originally published in Mauritius Island and France in 2020.

Shenaz Patel was born and lives on Mauritius Island. She has several jobs: journalist, playwright, novelist, and translator, and she is also a comics and children’s book author. She has written nine books for children, including A Dream of Birds, which was first published in French and English in Mauritius and France. She was named Chevalier des Arts et des Lettres in 2013, a high honor given by the French minister of culture.

Emmanuelle Tchoukriel was born and lives in France. Passionate about nature, she studied visual communication before entering the Estienne School in Paris. She specialized in scientific drawing, and she excels in illustrating flora and fauna. On Instagram: @emanuelle_tchoukriel

Edwige-Renée Dro is a writer, translator, and literary activist from the Ivory Coast, in Africa. Her writings have been published in anthologies such as New Daughters of Africa and Africa39, among others. She has judged many literary prizes, including the PEN International New Voices Award and the Etisalat Prize for Literature. She was awarded the Miles Morland Writing Scholarship in 2018 and is a 2021 resident of the International Writing Program at the University of Iowa. Learn more at edwigedro.wordpress.com. 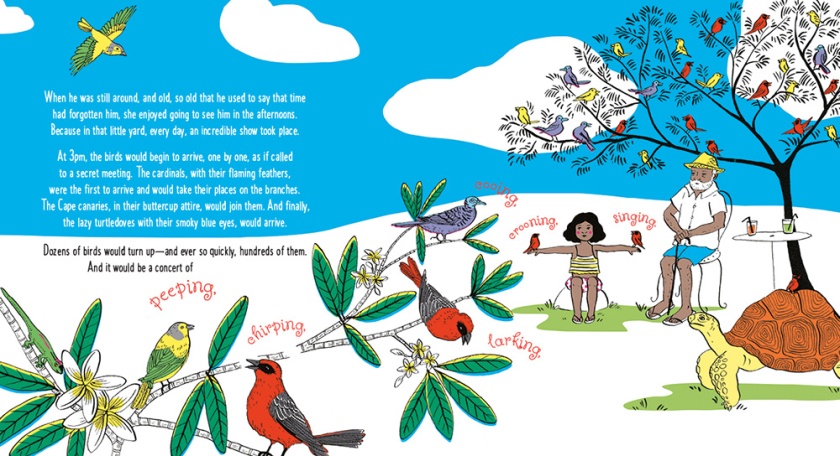 Want a chance at winning your own copy of A Dream of Birds? Enter the Rafflecopter giveaway! U.S. and Canadian addresses only, please