I’ve said it before: when it comes to books, my eyes are bigger than my reading capacity. I’m attempting to read down as much as I can before the new year, so please enjoy my TBR as I whittle it down.

Ages 4-8
Big families are big fun, and this mestizo family – a mix of Mexican people and cultures (Indian, Spanish, French) – is full of cousins! They’re all gathering for a special reason, and Alejandro and Sofia act as our narrators as they introduce us to each of their cousins. The family members are different ages, have different interests, abilities, and appearances that we learn about as we go through each colorful spread. There is some Spanish language infused into the English text, and the book is also available in Spanish. Beginning with the pages of a family photo album and closing with a family picture of all the cousins, it’s a wonderful story about how cultural diversity exists and flourishes within families: the small communities where it all begins.

Bronson Beaver is a 13-year-old builder, inventor, and video game fan whose family runs Beaver Valley Lodge, a hugely popular vacation resort. While Bronson just wants to spend a weekend playing video games with his best friends, his father has other plans: the big pancake festival is happening, and Bronson has a list of chores to get done for the festival! Like any brainiac inventor, Bronson decides to take the easy way out and invent a robot to do all the chores while he and his best friends can take part in the Zombie Fight video game tournament and win the cash prize that will allow them to build their dream workshop. You know the true course of video games and robots never did run smooth, though, and things go wrong in a big way: and now it’s up to Bronson and his friends to make things right. A smart chapter book about friendship, making good decisions, and with a nice STEM component, plus black and white illustrations throughout, I hope we see more of Bronson and friends in the future. Give this indie published book a shot and invite your kiddos to build robots of their own, with some after-holidays boxes and decorations you have available to repurpose. 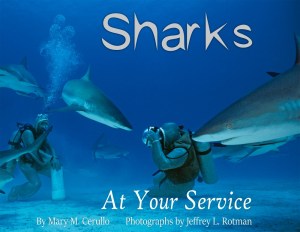 There are two stories at play in this story about sharks and all the jobs they do: the fictional story of a girl named Marina and her dad’s trip to the aquarium, where they see sharks and attend a talk by shark photographer (also the photographer behind the photos in this book) Jeffrey Rotman, and the nonfiction facts and photos of sharks that run parallel to the fictional narrative. Marina’s aquarium visit starts a growing fascination with sharks; on the way home, she sees sharks everywhere! This gets her thinking of all the jobs sharks have, keeping the ocean in balance and clean: sharks like tiger sharks eat just about anything they see, earning the nickname “garbage collectors of the sea”; they weed out weak and sick ocean life, keeping disease from spreading through schools of fish; their superior senses help them maintain their status as alpha predators of the sea. Manga-influenced color illustrations and incredible color photos on every page make this a book shark fans will pick up again and again. 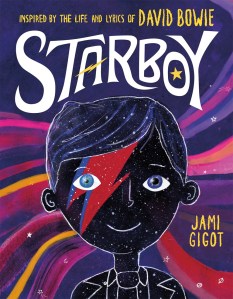 Inspired by artist, singer, actor, and icon David Bowie, Starboy is a breathtaking tribute to every kid who doesn’t feel like they fit in… until they find that they do. David is a boy who lives in a black and white world until he hears “star chatter” that brings color to his world… and then again when he hears music on the radio. Music brings color to his world, and gives him a place where he belongs: and reaches out to color other people’s worlds, too. Jami Gigot’s illustrations bring David Bowie’s magic to life through sparks of color and nods to his personas like the Starman, Major Tom the Astronaut, the chic ’80s music and fashion icon, even Labyrinth’s Goblin King. As David the Starboy comes to life through music, the spark spreads to his schoolmates and people on the street, showing readers the ability that music has to reach inside and speak to us – just like “star chatter”. An author’s note talks about the influence of David Bowie on fashion and music, an there are fun facts and further resources for readers interested in learning more. The cover is a gorgeous tribute to Bowie’s Starman persona from the 1972 Aladdin Sane album cover.

Starboy has a starred review from School Library Journal. 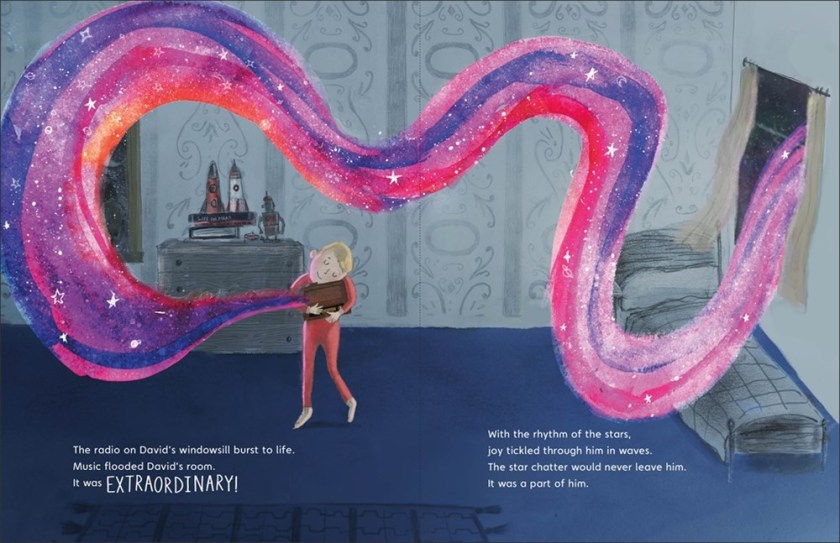 A cute pet shop fairy tale, I Can Be Kind is the story of Oscar, a 2-year-old piranha found in the sewer after being flushed by his owner. He ends up at a pet shop in Brooklyn, where he terrorizes the fish in the tank next to him. Being a carnivorous fish, the pet shop owner fed goldfish to Oscar until one day, when Maria – a friendly goldfish who refused to be scared off by Oscar’s posturing – ends up in Oscar’s tank! Oscar can’t eat Maria – she’s his friend, and he’s got a crush on her – and the two end up sharing fish food together, living happily ever after. It’s a sweet story, illustrated in full color, with coloring sheets available with the paperback version and for free at Rainbow Gal’s website.