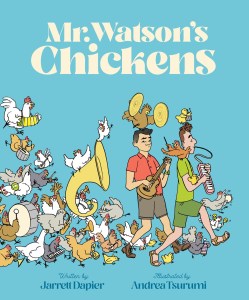 Mr. Watson and Mr. Nelson are a happy couple who share their lives and their home with a couple of dogs, a few cats, and a handful of chickens. But Mr. Watson just loves his chickens so much, and acquires more and more, until he’s got 456 chickens! The chickens are everywhere and into everything, and one chicken, Aunt Agnes, has a habit of making up her own song that she sings all the time. Mr. Nelson loves Mr. Watson, but something has to give. Mr. Watson loves his chickens, but he loves Mr. Nelson more, so together, they decide to give the chickens away to loving homes at the county fair… but the chickens escape, and chaotic hilarity ensues! An hilarious Where’s Waldo-type spread invites kids to help find a missing chicken, and Aunt Agnes’s favorite song makes for an extra-fun interactive readaloud. Mr. Watson’s Chickens features an LGBTQ+ couple in a sweet story of love and chickens, and a richy diverse cast of characters throughout the story. Perfect for storytime reading, with a fun chick and egg peekaboo craft for after the story’s done.