I’m still reading graphic novels by the bunch: I’ve even applied to be a CYBILS Graphic Novel judge this year, because I had such a great time being one last year! There are such good books coming out for middle grade and YA, and with a new focus on early reader graphic novels picking up strength, I can honestly say we comic book fans have inherited the earth and it feels good. Here are a few more to add to your Fall order carts. 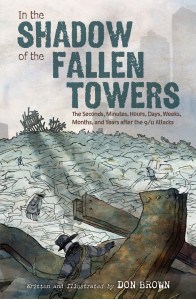 In the Shadow of the Fallen Towers : The Seconds, Minutes, Hours, Days, Weeks, Months, and Years after the 9/11 Attacks, by Don Brown, (Aug. 2021, Clarion Books), $19.99, ISBN: 9780358223573
Ages 12+
This year is the 20th anniversary of September 11th. Award-winning author and illustrator Don Brown’s graphic novel takes readers into the moments directly after, the attack, and follows the ramifications of that day, still felt in 2021. Don Brown helps put readers into the middle of that day, with quotes from survivors and family members, to help contextualize the events September 11th and its effect on global history and politics. It’s respectful, never melodramatic, thought-provoking, and a strong tribute to the people that we lost, and those we left behind. Artwork is bleak, rendered in shades of brown and grey, with periodic red-orange flames, illustrating the Ground Zero landscape. Back matter includes source notes, statistics, citations, and an afterword. An important addition to your nonfiction collections.
In the Shadow of the Fallen Towers has starred reviews from Horn Book and Publishers Weekly. 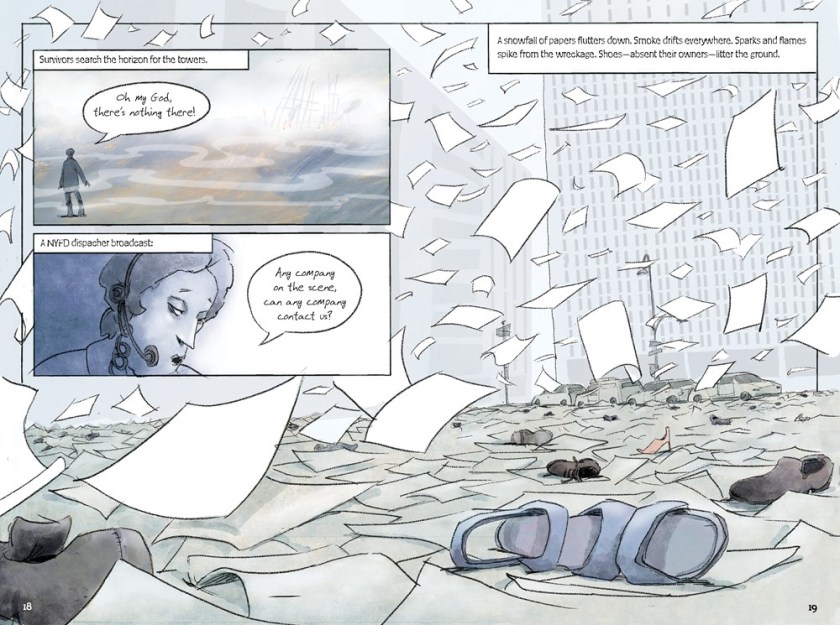 Witch for Hire, by Ted Naifeh, (Aug. 2021, Amulet Paperbacks), $12.99, ISBN: 9781419748110
Ages 12-15
High school freshman Cody is sent immediately to the loser table by a cruel sibling, where she meets Faye Faulkner; a goth chick with a witch hat and a group of “losers” that are accomplished students who don’t fit the “mean girl/jock” mold. When a series of pranks go from amusing to outright dangerous and destructive, Faye’s on the case – and the trail leads to Cody. Faye has to decide whether or not to reveal her true identity – she really is a teenage witch! – to Cody and help release her from a very bad deal, or to keep to herself, affecting her usual social distance? I love a good goth tale, and who better than Eisner Award-nominated series Courtney Crumrin’s creator, Ted Naifeh?  Witch for Hire goes beyond the usual mean girls high school story and masterfully weaves a tale of social media, influence, and manipulative magic. Faye Faulkner is your next favorite character; cool beyond compare, with witch powers, excellent baking skills, and who doesn’t give a good gracious fig about what you, or the cool kids, think of her. But she has a heart, and she cares, and that’s what makes her an endearing, interesting character. I hope this is a fun new series I can look forward to; my Courtney Crumrin trades need a break! 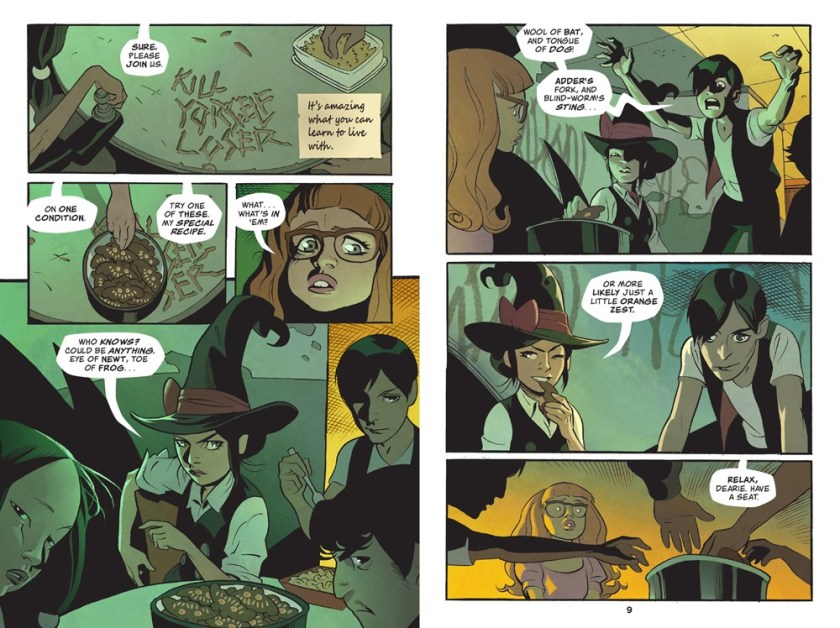 Treasure in the Lake, by Jason Pamment, (Sept. 2021, HarperAlley), $12.99, ISBN: 9780063065178
Ages 8-12
Two friends discover a long-lost city and friendship on an adventure of their own in this debut middle grade graphic novel. Iris is a bookworm who craves adventure outside of her tiny town, while Sam seems to like the comfort of small town life. They discover a dry river while exploring one day, and from there, happen on an ages-old mystery that involves a hidden city, and, possibly, a ghost or a time traveler. The key to Iris’s and Sam’s friendship is tied into this adventure, and the two have to get to the bottom of the mystery in time to salvage their own relationship. The artwork is the champ in this beautifully illustrated graphic novel; wordless panels and spreads let readers absorb the beauty of the artwork.
Treasure in the Lake has a starred review from Kirkus and is an IndieNext Children’s Pick. 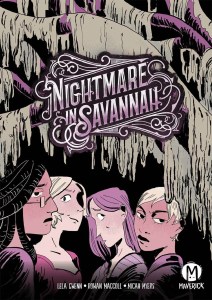 Nightmare in Savannah, by Lela Gwenn, Rowan MacColl, & Micah Myers, (Nov. 2021, Mad Cave Studios), $17.99, ISBN: 9781952303265
Ages 14+
Alexa is a teen, sent to live with her grandfather in Savannah, Georgia, while her parents serve prison sentences. Word gets out – it always does – and Alexa immediately finds herself an outcast at her new school before she’s even shown up. She falls in with a group of fellow outcast teens – Chloe, Fae, and Skye – and discovers, after a night of partying too hard, that they’ve become Fairies. And not the cute, Tinkerbell-type, winged little dots of light, either. Fairies of legend; changelings who steal human babies, cause trouble, that sort of thing. I was excited to pick this book up – the art is fantastic, with loads of shadows and goth overtones; as a fan of The Craft (1996), it spoke to my post-college soul – but I never quite got onto an even footing with the pacing. I loved Alexa, who emerges as a strong female character, and Fae, who has the Fairuza Balk influence for a new generation. It’s a book I’ll put into my collection – I know I have readers who will love it – but this one wasn’t quite my book.