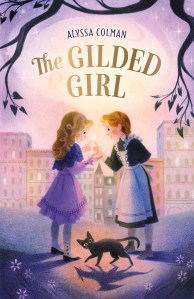 This middle grade book about magic feels like it’s set in JK Rowling’s Fantastic Beasts and Where to Find Them-era New York, and has such a strong social class storyline that makes it so relevant today. Magic exists in the world, but it’s been co-opted by the wealthy. When magical winds blow, you either “kindle” – take on the magic that manifests itself with the winds, or “snuff” – have your magic snuffed out, leaving you with no gifts. The wealthy have warped the entire idea that magic must run free, and the process has become more and more precarious as magic is limited, cornered, controlled. Izzy is a 12-year-old girl working as a maid in a prestigious school for magic run by the awful social climber Miss Posterity. She has plans to kindle on her own and leave Miss Posterity, to seek her younger sister who was taken from her when her parents died. Emma is a 12-year-old girl with a wealthy father who enrolls as a student with Miss Posterity. The 1906 San Francisco Earthquake upends Emma’s life, but bonds her with Izzy as the two plan to free themselves from Miss Posterity’s crushing yoke. With the help of a house dragon (in the form of a cat) and some friends on the inside and outside of Miss Posterity’s, the two may just start a revolution. The story is a journey for both Emma and Izzy; Emma begins as a child of privilege who learns big lessons when the tables turn. Izzy learns how to let her guard down and rely on people other than herself. It’s a study in friendship, in social class, and social change; having the recent immigrants living in New York City tenements in an area called “The Tarnish” is like reading a fantasy version of Jacob Riis’s How the Other Half Lives. The house dragon, in the form of a cat, is a wonderful addition to the story and injects some levity and cuteness into the storyline. (My own house dragon, Tiger, was not amused at being found out.)

Great fantasy for middle graders; if you’re a New York history fan like I am, you can talk for days about the implications of magic being kept out of the literal hands of immigrants and the poor and how the wealthy warped the natural flow of magic by making it unattainable except to the privileged. Must-read! Enjoy a discussion guide (spoilers in some of the questions, look at your own risk) courtesy of the publisher.