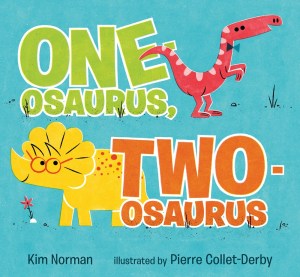 You know when you discover a book that makes you want to jump up and start a storytime? One-osaurus, Two-osaurus falls firmly into that group. A group of dinosaurs are playing in a child’s room when they decide to start a counting game: “One-osaurus, two-osaurus, three-osaurus, four…” It’s a mash-up of hide-and-seek and counting, as the dinos hide behind large, bold numbers; they tuck tails and necks, waiting in anticipation for number 10, which sounds really, really big. What will it be? You have to read and find out! The addictively playful rhyme scheme will make you want to jump and dance as you read. Hand out number coloring sheets (Mr. Printables and First Palette have good ones) and invite your storytime Kiddos to hide behind them as you read along, and make sure to stomp and roar! Digital illustrations are lively, silly, colorful and incredibly fun, with cartoony, bright dinosaurs twisting themselves into hilarious shapes to pose by and hide behind numbers. Bold, black, oversized numbers make it easy to count along, even for the kiddos sitting in the back of the group! Display and read with other great dino books, including 1, 2, 3 Do the Dinosaur by Michelle Robinson & Rosalind Bearshaw, and some get up and dance stories, like Bill Martin Jr. and Michael Sampson’s Spunky Little Monkey and Sandra Boynton’s Barnyard Dance.