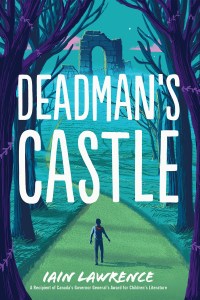 Twelve-year-old Igor and his family have been on the run for years. When he was five, his father saw a terrible crime; ever since, they’ve been leaving homes in the middle of the night, creating new identities never settling in one spot, as a man his dad refers to as The Lizard Man hunts them down. But when they settle in yet another town, Igor is tired of running. He wants to be a normal middle school student. He wants to go to school, have friends, go to sleepovers – and he’s more and more worried that The Lizard Man may be a construct of his father’s imagination. But what if it’s not? Deadman’s Castle is is a solid psychological mystery that will keep readers turning pages – I finished this in the course of a day rather than put it down – as they, like Igor, discover new secrets with each turn of the page. It’s intense at some points, taut at others, and a thoroughly enjoyable read.

This one has an easy booktalk: “You think your parents are overprotective? Igor can’t have a computer, video games, or even a cell phone because his father is convinced a bad guy is going to track him and his family down using them! And no, he isn’t allowed to come to the library to use them, either.” (Because I know that’s what at least one of my wisecrackers would come up with.)