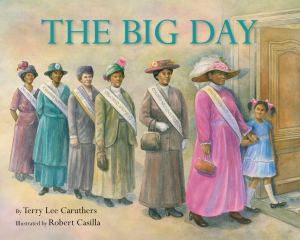 This celebration of suffrage and Black women voters is a fictionalized story of Agnes Sadler, the first Black woman to legally vote in Knoxville, Tennessee, in 1919. Agnes, called Big Mama here, wakes her daughter Tansy up and urges her to get moving; today is a “big day”, after all. Tansy and Big Mama dress in their finest, get on the bus, and head to the polls; it’s voting day and women have the vote! A lovely tribute to Black women’s suffrage, Agnes and the other women voters proudly wear sashes; the Black women belong to the “Colored Women’s Political League”, and the white women wear “Votes for Women” sashes. The artwork is colorful, soft, and carries a beautiful, historic feel to it. Endpapers are made up of newspaper articles about women’s suffrage, and back matter provides more information about Agnes Sadler, women’s suffrage and Black women’s role in suffrage, and sources for further reading. A great introduction to Black women’s history, and a good picture book biography on a little-known figure in Black suffrage. 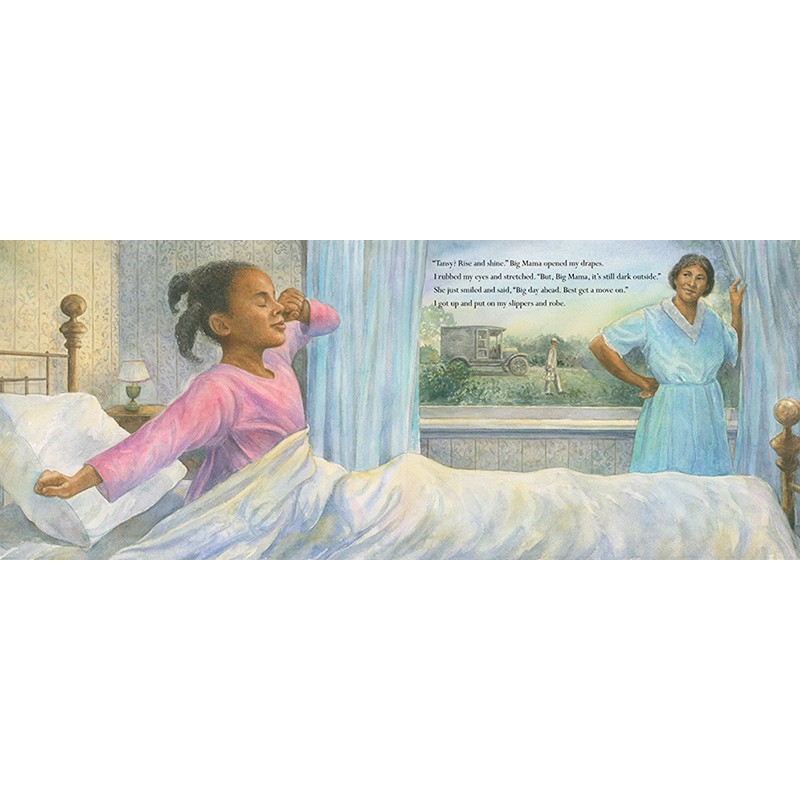 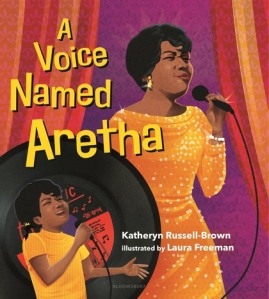 All hail the Queen of Soul! This picture book biography on Aretha Franklin starts from her beginnings, singing in her father’s church choir through her singing for President Barack Obama (and bringing him to tears). Covering Aretha’s social justice work, Katheryn Russell-Brown notes that Aretha refused to perform for “whites only” audiences and her work with civil rights groups and philanthropy. Laura Freeman’s artwork brings Aretha Franklin to life with rich colors and passionate renderings; Aretha’s head thrown back as she sings and plays the piano at 12; clasping her hands to her chest as she belts out a song in the choir, and Barack Obama wiping a tear away as he listens to a lushly garbed Franklin sing onstage. Endpapers are a feast of vinyl and gold records on a deep purple background. Back matter provides more information about Aretha Franklin’s life and music and some of her hit songs. A must-have in your picture book biography section, this is an excellent introduction to a music and civil rights icon.

A Voice Named Aretha has starred reviews from Kirkus and School Library Journal. 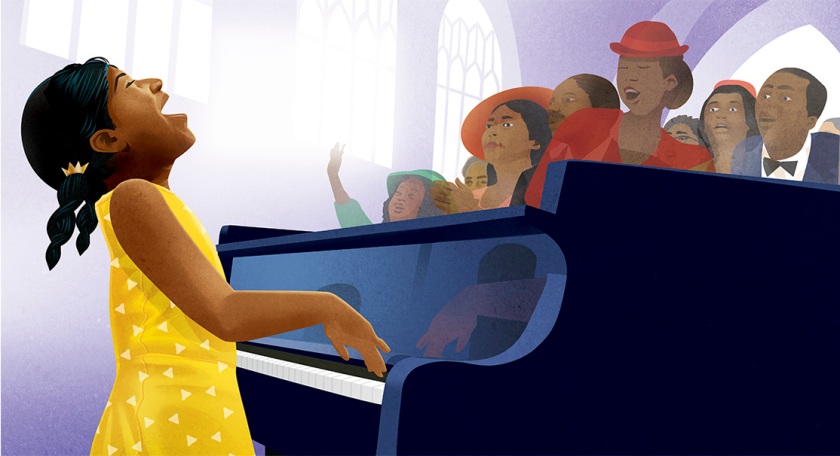 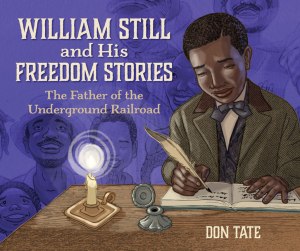 Written in free verse, Don Tate’s biography of William Still, abolitionist, member of the Underground Railroad, and archivist of stories that reunited families, is simply incredible. Born to former slaves living in New Jersey, William Still grew up with a desire to learn and a desire for justice. He moved to Philadelphia and worked with the Anti-Slavery Society, where he took on greater roles, ultimately becoming part of the Underground Railroad. When he reunited his long-lost brother with his family, Still began keeping extensive notes on the people he spoke with, leading to more reunions. The verse is concise but packs emotional punches, like this moment where he meets his brother, Peter: “The man was middle-aged. / Stooped back. Furrowed brow. / Threadbare clothes. / His name was Peter. / He was looking for his mother, his family.” Endpapers include excerpts from Still’s observations. Digital illustrations are emotional and expressive. Another must-have picture book biography. Publisher Peachtree has an excerpt, teacher’s guide, and poster on their website.

William Still and His Freedom Stories: The Father of the Underground Railroad has starred reviews from School Library Journal, Booklist, and Publisher’s Weekly. 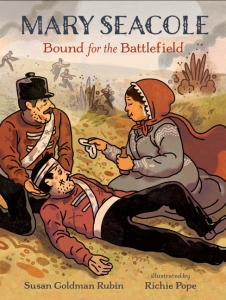 This intermediate picture book biography on Crimean War figure Mary Seacole, born in Kingston, Jamaica, begins with her childhood in Kingston, watching her healer mother care for soldiers with herbal remedies and hoping to be like her one day, through her own healing work with soldiers during the Crimean War and cholera patients in Panama. The book deep dives into the racism she encountered as a biracial woman, including a run-in with Florence Nightingale, who scoffed at her remedies and cures and refused her services. Drawn from Mary Seacole’s own writing, this biography is comprehensive for younger readers, with richly colorful and evocative illustrations. Back matter includes sources notes and a bibliography. An important biography for younger readers. 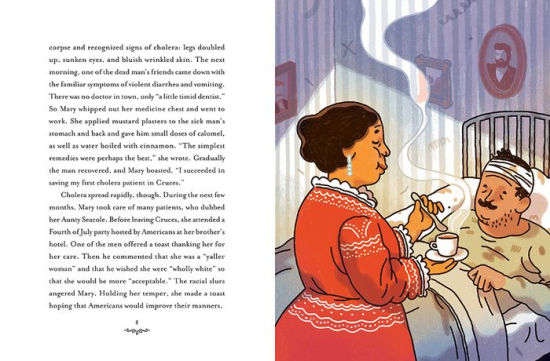 Inspired by author Michael S. Bandy’s memories of taking the train as a child of color during segregation, Northbound tells the story of a boy of color and a white boy becoming friends on a train ride from Alabama to Cincinnati, amid the shifting segregation seating on the train. Young Michael boards the train and goes to the “colored only” section, but when the train leaves Atlanta, the signs come down and he’s free to roam the train. He meets Bobby Ray, a boy his own age and from his own town, and the two become instant friends. Once the train approaches Chattanooga, though, the signs go back up and the new friends are separated. A heart-rending story of separation and segregation, Northbound ends with a spark of hope. The story explains segregation in its most basic terms to children, and encourages discussion about how the story – and our past – parallels with our present. James A. Ransome’s watercolor and collage artwork creates splendid scenery as the train speeds along and the two boys become friends over the course of a train ride; moments of racism, as when the conductor leads Michael out of the “whites only” car when the train approaches Chattanooga, are emotional; the “whites only” harsh white sign stands out like an ugly scar across a lovely painting. An author’s note explains the Interstate Commerce Act and how segregation played into it.

Northbound: A Train Ride Out of Segregation has starred reviews from Kirkus and Publishers Weekly. 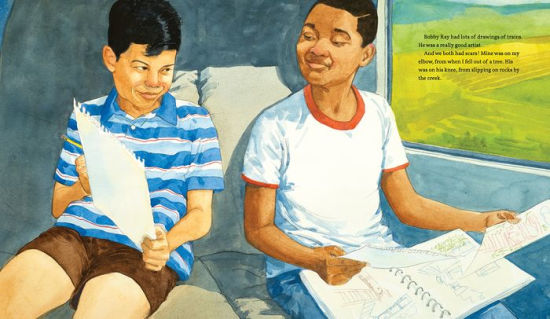