Young Bessie just wants to ride her bike with the kids after school, but they’re awful to her. They tell her she’s not good enough, not fast enough, not pretty enough, not tough enough. Determined not to listen to them, she asks her mother for advice and is told to “ask the Man upstairs”; she does, and she has a dream where she rides all over the world: she rides over water, between buildings, and even up into the sky. Bessie wakes up with a new determination, and starts riding that bike. Mistress of her own destiny, she beats the boys who scoffed at her, and goes on to become Bessie Stringfield, groundbreaking pioneer motorcyclist and traveler.

Bessie’s story is told here by Joel Christian Gill, award-winning graphic novelist and historian behind Strange Fruit, Books One and Two. Mr. Gill creates an inspiring story with a young child of color at the forefront. Bessie Stringfield was othered from a young age, and used that to fuel her resolve. In the book’s back matter, we learn that Bessie traveled the United States using Victor Hugo Green’s “Green Book”: The Negro Motorist Green Book, further illustrating Bessie Stringfield’s determination to succeed in the face of those who would other her. Joel Christian Gill’s artwork is filled with deep, vibrant color and is a joy to read. Endpapers show Bessie happily riding her bike as depicted in her dreams: throughout the world and beyond. The book is playful, with a spine of steel delivering its message. Read this often. 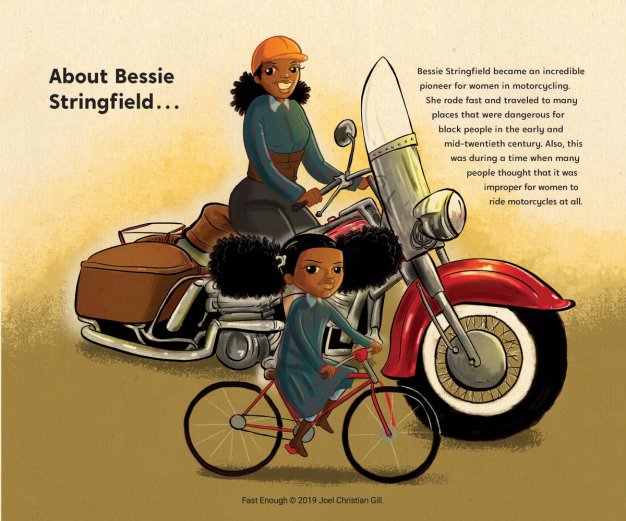