When you have a cover this amazing, you need to go full size. 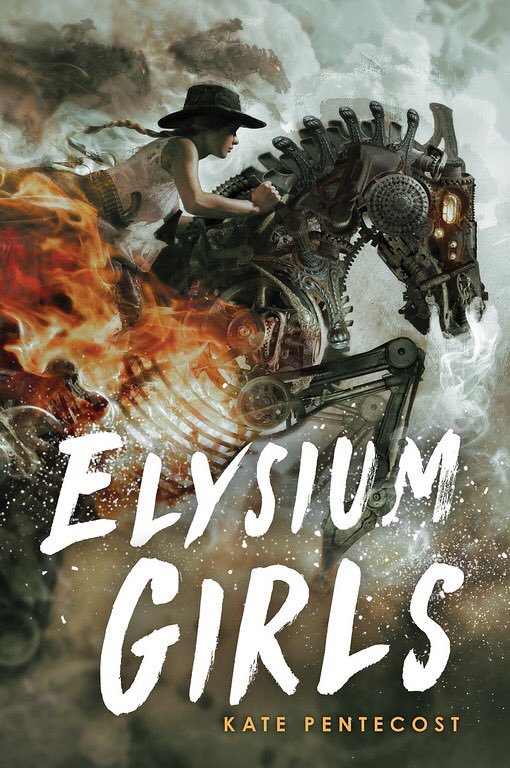 When I was at a Book Buzz where this book came up, the publisher rep said, “I love this book! It’s hard to describe, but it’s so good! It’s so weird!” And really, that was all I needed to hear: I wanted to read a book with a big steampunk horse on the cover. I was not disappointed.

Elysium Girls is Dust Bowl-era dystopian fiction. In 1935, while America is in the grips of the Great Depression, a giant dust cloud rolls over Oklahoma. The goddesses of Life and Death have taken this little chunk of America and placed it in its own space and time, a chessboard for their own game. The survivors of the storm have 10 years to maintain order and set aside a third of their crops as a sacrifice for a chance to survive. Mother Morevna, an ailing witch in charge of a settlement called Elysium, takes on Sal, a teenaged apprentice, when a stranger calling himself Asa Skander arrives with supplies and a knack for magic himself. Sal and Asa are exiled from Elysium following a duel, where they meet a group of young women who have their own histories with Elysium and beyond. Facing the final days of the contest, a rising death toll, and plummeting spirits, Elysium and the group of women – and Asa – join forces once more to face the coming Dust Soldiers and attempt to break the game in order to win it.

This book is AMAZING. A dystopian historical fiction piece placing readers in Depression-Era Dust Bowl America? It’s a great concept, and Kate Pentecost touches on the endemic racism that endures even among the survivors; her description of the Dust Sickness that eats away at the populace is so gritty and raw that you’ll want a sip of water and to clear your throat as you read. Sal emerges as a smart heroine that comes into her confidence as a magic user, and Asa, who could easily have been sidelined as a cardboard supporting character, has a good backstory and has a character arc that really develops him nicely. Supporting characters all get fleshed out nicely, and should easily get reader investment.

The shifting perspective, from Sal’s first-person narration to third-person narration, takes a little getting used to, but I feel into the rhythm pretty quickly. The action is fast-paced, and dialogue will keep readers turning pages as different plots and subplots become revealed. I loved this one, and really, REALLY, want my own metal horse now.