At the beginning of the school year, Macmillan sent me a box of new fiction to check out; I’ve been working my way through it, but had to take some time to post about the Spy Penguins books by Sam Hay, with illustrations by Marek Jagucki. These books are hilarious and loaded with wacky adventures! I read both books in the series so far (there’s a third one coming in September 2020), and have started reading the first book to my kiddo. He’s thoroughly enjoying them. So let’s take a look at the newest dynamic duo, The Spy Penguins. 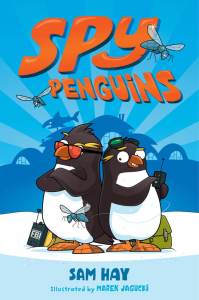 The first book in the new Spy Penguins series introduces us to Agent 00Zero and Q, better known as Jackson and his best friend, Quigley. They’re two young penguins who have big dreams of joining the FBI (Frosty Bureau of Investigation). Jackson wants to be a field agent, just like his Uncle Bryn, while Quigley wants to be the gadget guy, creating all sorts of cool inventions, just like his cousin, Sunny. The problem? They’re a little young, a little dorky, and have a gift for getting into trouble. But when rare fish start disappearing from the aquarium, jeopardizing their friend’s Lily’s dad’s job and reputation, the two agents-in-training get down to business! But can the two crack the case AND avoid being the next to disappear?

Spy Penguins is just fun to read. There’s some good world-building, with penguin-related vocabulary (flipper and ice-related terms, krill-sized problems), and creative backgrounds for the side characters, like Jackson’s Type-A mom, who is a “truth magnet” that can track you down and whose temper is measured in shark levels, or Jackson’s father, a more creative type who constantly creates new rooms to add on to the family home. Jackson and Quigley make a great and lovable team, and the action and fast-paced storytelling will ensure that kids will want to spend time with these two – and their extended group of family and friends – again. Black and white illustrations add to the fun and the story, providing a visuals and a solid framework around the story. 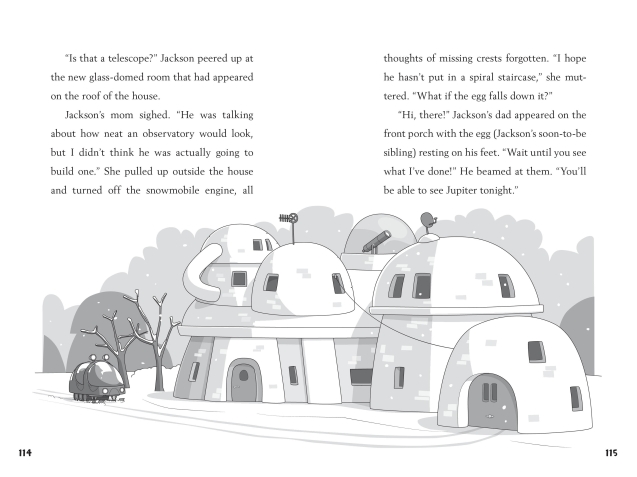 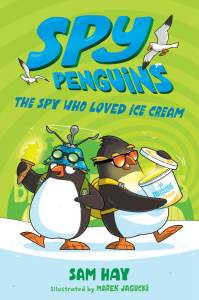 Jackson and Quigley are back, and just in time! Jackson’s Uncle Bryn, actual member of the FBI (Frosty Bureau of Investigation), has been hypnotized and is on a crime spree! The two wannabe-agents-in-training have to figure out what happened to Uncle Bryn, prove his innocence, and dodge Jackson’s mom, who still has them on punishment from the last adventure!

Picking up immediately after the events of the first Spy Penguins novel, The Spy Who Loved Ice Cream begins with Jackson and Quigley scrubbing seagull poop as part of their punishment, meted out by Jackson’s mom. But things take a turn when they stop at the ice cream parlor and meet Uncle Bryn and two other FBI agents, who are eating a weirdly glowing ice cream and don’t acknowledge the two. Sure, it’s strange, since Uncle Bryn is Jackson’s favorite uncle; when they discover that Uncle Bryn is wanted for robbery, they know something is REALLY up. Loaded with more gadgets, delicious (and mind-altering) ice cream, and new ways of trying to avoid Jackson’s mom, The Spy Who Loved Ice Cream is every bit as much fun as Spy Penguins. More characters get fleshed-out backstories, including Quigley’s tech whiz cousin, Sunny and antagonist Hoff Rockhopper. The inventions are straight-up hilarious this time around, including a hat that’s supposed to deflect seagull poop and a suit made of sardine poop that should (emphasis on “should”) render the wearer invisible. The illustrations and fast-paced, fun writing will keep readers coming back for more.

If you have readers who love Snazzy Cat Capers, introduce them to Jackson and Quigley. If these characters all existed in the same universe, I’d be thrilled. (CROSSOVER!) 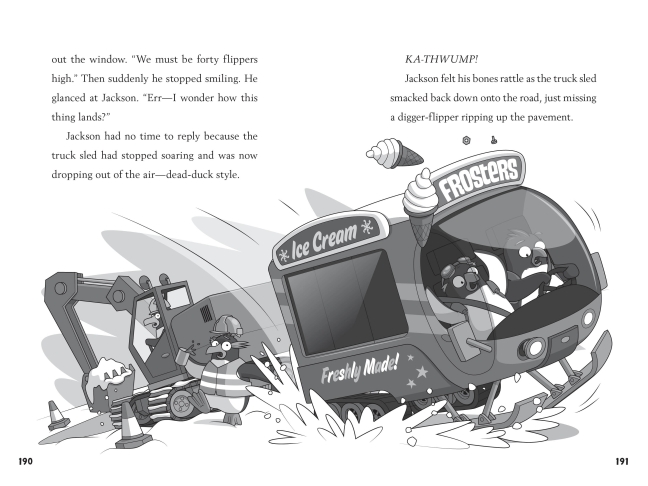