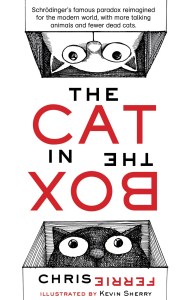 The Cat in the Hat meets quantum physics with Chris Ferrie’s The Cat in the Box. The story is similar in structure to Dr. Seuss’ classic, giving it a tongue-in-cheek twist. The narrator sits with Schrödinger himself, puzzling out a problem, when a box shows up. It’s a cat! Can the cat solve the problem? Schrödinger thinks so – and all the cat has to do in this situation is “see and not see”. Whew! What a relief. The story explains Schrödinger’s theory in rhyme that the folks on The Big Bang Theory would love: “Schrödinger used/this cat in a box/to dream up the first/quantum paradox/A paradox is something/that doesn’t make sense/There must be an assumption/that is causing offense”. The cat is the winner in this story, giving the two humans a lesson in quantum physics and probability, sing-songing, “The more math you know, the happier you’ll be”. An author’s note on Schrödinger recounts the original hypothesis, which didn’t end nearly so well for the cat.

The illustrations are black and white, with a big, googly-eyed scientist and a googly-eyed cat. Mathematical symbols and atomic symbols abound, with occasional reds for emphasis. The fun artwork is a perfect match for the light tone of the rhyme, and makes this a great book to keep around for teens and college students who may need a little brain break from studying.

Can younger kids read this? Of course! It’s a fun rhyme, loaded with math and science terms, and there are adorable cats and wacky scientists telling readers that math is fun. They may not get the bare bones of quantum physics, but they’ll pick up new science and math vocabulary.

Chris Ferrie, bringing a love of science and math to the kiddos. 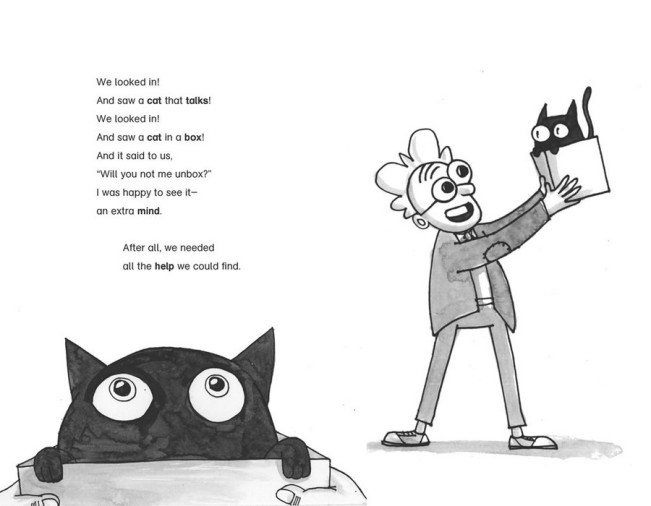