Two more from the great TBR read-down! I’ve got some realistic fiction and some dark(ish) fantasy for you, right here! 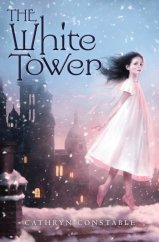 Livy is a 12-year-old English girl who is still reeling from the recent death of her best friend is uprooted when her father accepts a prestigious job as the librarian at Temple College: a position that comes with a spot in the school for Livy and a new home for the family. Livy discovers the stone Sentinels – angels – on the roof of the school are tied into the school’s history, and that the school’s founder and her possible ancestor, Peter Burgess, was consumed with studies on gravity and flight. As Livy tries to fit in at school, she also finds herself drawn to the Sentinels and their secrets; a mystery between the school’s previous librarian, the current headmistress, and Peter Burgess moves the story forward.

Character development takes a back seat to the many subplots, leading to an at-times confusing story that has strong fantastic elements that I would have liked to explore more. Livy is a developing character who would have benefitted more from a stronger subplot on grief and loss, and the main plot – the Burgess mystery – being more defined, less stretched out between characters. If you have strong fantasy readers who liked Constable’s previous book, The Wolf Princess, this may work for them. 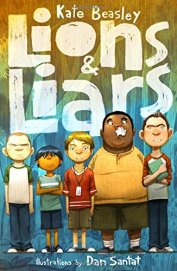 This case of mistaken identity at a summer camp for unruly kids is at times, hilarious; at times, touching. Fifth grader Frederick Frederickson is not the big kid on campus. He’s not even really the small kid on campus. According to his friend Raj’s “food-chain theory about life”, there are lions, like Devin; the big kid on campus. There are gazelles, the kids who are bullied by the lions. There are meerkats, who watch the world go by, and then, there are fleas, who live on the butts of the meerkats. According to Raj, Frederick is a flea. This doesn’t sit well with Frederick; things only get worse when his long-awaited family vacation is canceled because of a Category 5 hurricane threat. After his friends pull a mean prank on Frederick at a birthday party, he’s had enough, and pushes back. The only problem is, pushing back ends up with him stuck on a boat that leaves him on the shores of Camp Omagoshee, a summer camp for troubled kids. It gets worse when he’s mistaken for camper Dashiell Blackwood, whose name tag is the only one left. Assuming Dash’s identity, he finds himself in the big leagues for a change: Dash is legendary for being bad, but Frederick? He tries to convince his cabin mates, Nosebleed, Specs, The Professor, and Ant Bite, that he is every bit as tough as they come, but even Frederick isn’t sure if he’s going to be able to back up Dash’s fame. When the camp is cleared out when the hurricane starts heading in their direction, Frederick and his new group learn that they have to work together to stay safe, and maybe they’ll even become friends.

At its heart, Lions & Liars is about cliques and labels. The mistaken identity plot makes for some laugh-out loud moments, especially as Frederick tries to live up to Dashiell Blackwood’s infamous camp legend, but there’s also the stress of living a lie and the risk of being discovered. What happens when real friendships are made on the foundation of lies? The characters are nicely developed, and go beyond their “bad kid” label to show readers what constitutes a “troublesome child” in others’ eyes. Dan Santat’s black and white illustrations will keep readers turning pages. Kate Beasley has a great post about the labels kids get stuck with on the book on Nerdy Book Club.