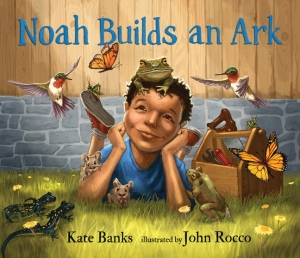 A boy named Noah knows there’s a storm coming. As his parents get ready to ride out the storm and keep their family safe, so does Noah. He re-purposes his red wagon into an ark to hold his animal friends, building a roof, gathering food, and furnishing the ark to keep his garden friends safe. When the storm arrives, Noah and his family are safe and warm, and so are the frogs, birds, snakes, mice, spiders, and beetles Noah has sheltered within the ark. When the storm passes, Noah is relieved to see the animals made it through, and the garden returns to life.

This is a lovely, non-theological retelling of the famed tale. Noah is an boy of color living in an urban setting who clearly enjoys nature, as evidenced by his compassion and empathy in creating a safe space for the wildlife in his backyard and by his animal companions present throughout the process: a bird sits on the fence with him as he sees the storm clouds rolling in; a butterfly sits on his foot as he lays in his yard; a grasshoper keeps him company as he assembles the ark. The narrative moves between Noah’s parents preparations, and Noah’s, with him echoing his parents’ sentiments such as, “We need to get ready”, “Better be prepared”, and, as the storm moves in, “Come”. It’s a wonderful example of modeling that parents and caregivers will recognize and that kids will relate to.

John Rocco’s pencil, watercolor, and digital artwork is realistic and subdued. The human faces are gentle and kind, the gestures warm and pleasant. Noah Builds an Ark is a story of compassion, nature, and life, and it’s a great storytime pick. Noah Builds an Ark has a starred review from Kirkus.