I’ve been meaning to do something like this for a while, now: create a list of webcomics that I could post by the computers at my library, so the kids could check them out and maybe discover a comic to follow. They’re huge graphic novel fans, and this would give them something new to read while they’re waiting for the next volume of Amulet/Pokemon/anything by Raina Telgemeier to publish.

I started going through my inbox, and lo and behold (and with much embarrassment), I found an email from Dylan Campbell, a creator who let me know about his new webcomic, Scared by the Bell, back in January 2017. It is insane, how one thinks, “Oh, I’ll get to that in a second”, and a year later, it’s still in the inbox. But the good news is, there are three issues online now! But I’ll get to that. First, Scared by the Bell. 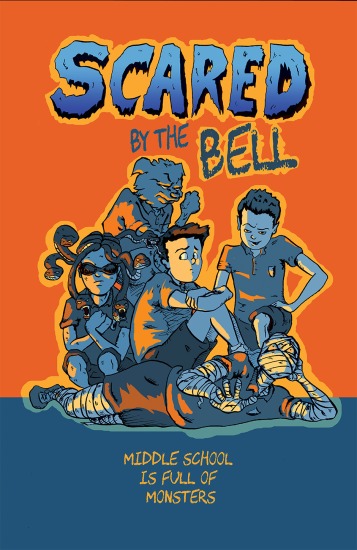 Peter is a kid on his first day at Lighthouse Middle School, but this is no ordinary, run of the mill school. Peter’s classmates include Maggie (a Medusa), Vlad (a vampire), Frank (Frankenstein), and Marv (a werewolf), for starters. Principal Merlin takes Peter under his wing to explain a little bit about Lighthouse, but Peter’s still baffled: how did he get here, and how is he going to make it through middle school when his classmates want to snack on him?

Scared by the Bell has three complete issues under its belt, and Dylan Campbell had a successful Kickstarter earlier this year, all great signs. The art is cartoony and fun, and the classmates are familiar and inspired; there’s a Cthulhu-faced kid (and you know how I love my Lovecraftian monsters); a mummy, a skeleton, even a scary looking teddy bear. Now that the infamous Goldilocks has also joined the crew, I’m looking forward to even more adventures. Scared by the Bell updates on Fridays – a great way to end the week! For Spanish speakers, Dylan offers “Asustado por la Compana” (http://asustadoporlacampana.smackjeeves.com/), and translates it himself, which is pretty fantastic. He welcomes comments and suggestions!

Also – I have a Spanish version of “Scared by the Bell” called “Asustado por la Compana” that updates every Friday as well.  You can find the link to the Spanish version over here at: http://asustadoporlacampana.smackjeeves.com/ 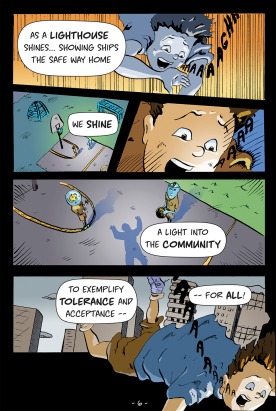 Dylan, I am so sorry that it’s taken almost a year to get on board with your comic, but Scared by the Bell is going on my list of webcomics. I like the writing, I like the character interaction, and I enjoy the artwork.

If you’ve got graphic novel readers, let me know if webcomics are working for your readers!