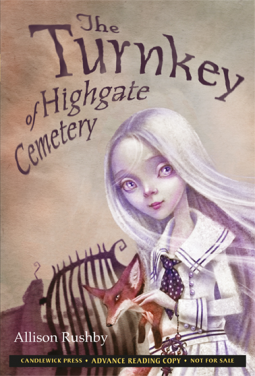 Flossie Birdwhistle is a ghost, but that’s beside the point. She’s got a very important job as Turnkey at London’s Highgate Cemetery; making sure her fellow souls are at rest and cared for. She’s a young ghost – she’s only 11- and while some may have something to say about that, she’s good at her job. Right now, her big concern is World War II, currently raging over Britain, and disturbing her dead neighbors. Flossie encounters the ghost of a German soldier up to no good, so she starts investigating, and learns that he’s somehow managed to bridge the gap between the worlds of the dead and the living. She has got to stop him before he – and the enemy army – can destroy Britain!

This is thoroughly enjoyable historical fiction with a nice dose of the supernatural. Flossie has a nicely sketched out backstory, and we learn just enough about her fellow ghosts and familiars to keep us satisfied and turning pages. I like how author Allison Rushby incorporated Hitler’s well-documented fascination with the supernatural into the story, making this a “what if” type of alternate history novel for younger readers, and I like Flossie’s determination and ability to think while under (often literal) fire. Mystery and ghost story fans will enjoy meeting Flossie and friends. Want to give readers a fun website? Let them visit the actual Highgate Cemetery’s webpage, where they can find war graves (including soldiers from WWII), take a virtual tour of the cemetery, and visit a few luminaries.

5 thoughts on “The Turnkey of Highgate Cemetery is keeping watch”