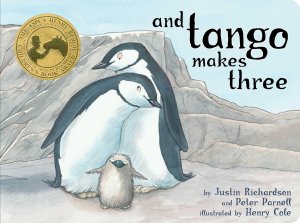 And Tango Makes Three is a classic in children’s and LGBT literature. It’s based on the true story of two penguins at the Central Park Zoo, Roy and Silo, and the little penguin they hatched together. Roy and Silo were (are?) are pair of penguins that discovered each other in 1998; they walked together; bowed to each other, swam together, even built a nest together. But no egg was forthcoming until their keeper, a nice man named Mr. Gramzay, put a fertile egg in their nest. The two penguins cared for the egg until it hatched, and Mr. Gramzay named him Tango, because “it takes two to make a Tango”. Could you squeal from the adorableness? So Tango made three; a happy little penguin family.

This sweet story about family caused an uproar you wouldn’t believe, because – GASP – two male penguins were depicted in a loving relationship AND as parents! Could you even? (It’s like… adoption never existed, amirite?) Poor little Tango and his dads made a lot of people nervous, and as a result, And Tango Makes Three has topped the 10 Most Challenged Books List between 2006 and 2010, and still gets people riled up 13 years later. That said, And Tango Makes Three also received a lot of awards, including designation as an American Library Association Notable Children’s Book (2006); the ASPCA’s Henry Bergh Award (2005); The Gustavus Myer Outstanding Book Award (2006); Nick Jr. Family Magazine’s Best Book of the Year (2006); Bank Street College’s Best Book of the Year (2006); the Cooperative Children’s Book Council choice, and Notable Social Studies Trade Book (2006); and it was a Lambda Literary Award finalist (2006). Not too shabby!

And Tango Makes Three is a story about love, family, and community. No one at the zoo gives a second thought to Roy and Silo’s relationship, and seriously, do you think kids who come to see the animals do? It’s a story of family and how, for one couple, a baby made them complete. Henry Cole captures the spirit of New York’s Central Park with his soft watercolors, and make Roy and Silo come to life with expressive facial and body expressions. If this isn’t on your shelves or in your storytimes – Father’s Day is coming! – please add it. And hug your dad(s).