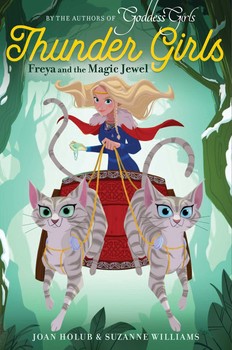 I LOOOOVE Joan Holub’s books, from board books to middle grade novels; I read ’em as often as I can and I love every single one of them. When I saw that the Goddess Girls team of Joan Holub and Suzanne Williams were starting a new series on the ladies of Norse mythology, I needed a moment to collect myself. And when I received a review copy from the author herself, I needed a few more moments. Okay, I took another moment. Let’s begin.

Freya is the 11-year-old goddess of love and beauty, happily living on Vanaheim: one of the nine worlds in Norse myth. When she and her twin brother, Frey, are summoned, by Odin, to Asgard to attend Asgard Academy as part of a new initiative to open relations between the nine worlds, Freya is skeptical. Her people have been at war with Asgard, and besides, she has it made at Vanaheim Junior High! But Odin is the king of Asgard, and she’s got to go, so she and Frey head out. Things go wrong from the start when her beloved jewel, Brising, falls from the Bifrost bridge. That jewel is what helps her see the future, and that also happens to be what Odin wants her to help him with! She also runs afoul of Angerboda, a bullying frost giantess, right off the bat. Freya has her work cut out for her, but she’ll learn – with the help of some new friends – that magic can be found in the wildest places.

I love, love, LOVED this book. Not strong on Norse mythology? You don’t need to be; you learn exactly what you need to within the pages of this book. Readers will meet characters whose names are practically household at this point, like Thor, Loki, Odin, and Frigga (thanks, Marvel!). Joan Holub and Suzanne Williams know their mythology and make the Norse tales readable for middle graders (the story of how that wall around Asgard was built is refreshingly kid safe, for starters) and put the same sense of fun into Thunder Girls that they put into Goddess Girls. There’s adventure, friendship, and enough mischief to keep readers happily turning pages. Display and booktalk with (what else?) Rick Riordan’s Magnus Chase and the Gods of Asgard books, KL Armstrong and MA Marr’s Blackwell Pages trilogy, and NatGeo’s Norse Mythology treasury. (Have some copies of Neil Gaiman’s Norse Mythology around for parents, too.)

Joan Holub has amazing printables on her author website, including Goddess Girls and its companion series, Heroes in Training, bookmarks. Suzanne Williams has a reader’s theatre script for one of the Goddess Girls stories, fun quizzes and downloadable stickers at her website. The next Thunder Girls book is out in October, featuring Sif, so I’ll be counting days until then.

One thought on “Make Way for the Thunder Girls!”