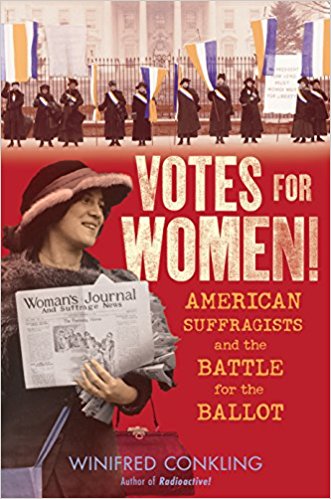 Winifred Conkling is emerging as a definitive chronicler of women’s history. Passenger on the Pearl told the story of Emily Edmondson, who escaped slavery and dedicated her life to education young African-American women; Radioactive! gave long-overdue props to Irène Curie & Lise Meitner, whose work on radioactivity was often overlooked in a male-dominated field; now, Votes for Women gives us a comprehensive history of the fight for American suffrage, long before women finally won the right to vote in 1920. For readers who may only be familiar with Susan B. Anthony, this volume is indispensable, introducing readers to Elizabeth Cady Stanton; Susan B. Anthony’s counterpart and founder of the suffrage movement, and Alice Paul, who took her cue from the more action-oriented British suffrage movement, and went to jail for the cause, where she and fellow protestors suffered deplorable conditions and were force-fed. We meet Victoria Woodhull, the first female Presidential candidate, and revisit Sojourner Truth’s famous speech, “Ain’t I A Woman?” Most importantly, we learn about the beginnings of intersectional feminism; when abolitionists and suffragists found common ground – and then diverged under political fire.

This is a comprehensive book, complete with photos, primary sources, and writing that never turns away from the more difficult moments in the battle for the vote: from racism to violence, it’s all here. It’s a good book for your nonfiction collections and women’s history collections for middle school and high school, with extensive primary source references, a timeline of American women’s suffrage, a bibliography, notes, and an index. Booktalk this with the graphic novel, Sally Heathcote: Suffragette by Mary M. and Bryan Talbot, which features a fictional character from the British movement, and is a great hook to get teens interested. A Mighty Girl has a strong list of additional reading, filtered by age, on suffrage.