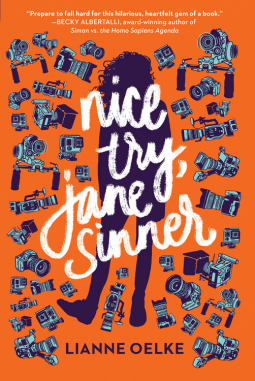 Seventeen-year-old Jane Sinner has been trying to reinvent herself after an incident that resulted in her being expelled from high school. She enrolls in Elbow River Community College to finish her high school credits, and while there, discovers what could be her chance: a reality show. A student-led production, House of Orange is basically Big Brother, starring Elbow River students, produced and directed by Elbow River students, and streamed online. Jane sees this as a twofold opportunity: to reinvent herself and to move out of her home, away from her overbearing Christian family. She applies for the show, makes it in, and moves out. The show starts ramping up, gaining popularity and sponsors, and Jane loves the chance to be her competitive and snarky self. She’s determined to win, but things don’t always go as planned…

Nice Try, Jane Sinner is alternately hilarious and unexpectedly deep. Jane, who narrates the novel, is deliciously snarky while deeply conflicted. Her incident – no spoilers – brings up plenty of discussion opportunities, one of the biggest being: can we reinvent ourselves? Do we need to, at 17? Jane and her fellow competitors form cautious friendships, but it’s tempered with the knowledge that, as the group shrinks and the stakes get higher, people are going to be backstabbed: something that will fuel Jane’s fire even more.

Lianne Oelke writes reality TV well. Her characters have the omnipresent camera and learn to work it to their advantages. She also creates smart, believable characters that you may like, you may loathe, but you’ll recognize; whether from your own reality TV viewing or real life. This one will be a hit with teens, who don’t remember life before reality, and readers will love Jane’s snark.