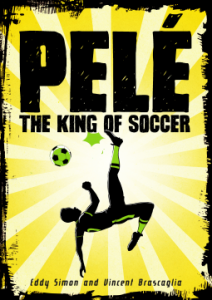 The latest graphic novel biography from FirstSecond is Eddy Simon and Vincent Brascaglia’s Pelè: The King of Soccer. From his beginnings as a child growing up in poverty in Sao Paulo, Brazil, readers see Pelè – born Edison Arantes do Nascimento, son of a football player whose career ended with an injury – rise from a child using a ball made from rags, to his dominance in youth leagues, and to his first professional soccer contract at the age of 15. He became a sensation at 17, when he led Brazil to victory at the World Cup, and went on to become “O Rei” – The King – a household name, a worldwide sensation. More than just a soccer player, Pelè traveled the world as a goodwill ambassador for UNICEF. An athlete worth more than face value, the Brazilian government and the military tried to force him to continue playing when he wanted to play for the U.S., and the United States thought that acquiring Pelè would make soccer the next great American sport. He partied with the likes of Mick Jagger and Andy Warhol, and had a turbulent personal life that includes multiple affairs and illegitimate children. Full-color photos of Pelè complete this solid graphic biography of a sports icon.

Great for middle school and up, display and booktalk with other graphic novel biographies, including Box Brown’s biography on Andre the Giant, and 21: The Story of Robert Clemente, by Wilfred Santiago.