Priyanka is an Indian-American young woman, living with her single mom, in California. She’s got so many questions: Why did her mother leave India to raise her daughter in the States? What’s India like? Why doesn’t she ever talk about India? And the big question: Who’s her father, and why hasn’t she ever met him? For Priyanka’s mom, though, the topic of India is closed. She will only say that things were different for women in India, and that’s that. Left with her questions, and feeling emotional after her uncle – her only father figure – becomes a new dad, Priyanka stumbles across one of her mother’s old suitcases, containing a beautiful pashmina shawl. She wraps it around herself and is transported to a magical, beautiful place: India. She also meets two guides: Kanta, an elephant, and Mayur, a peacock, who show her a breathtaking India. Priyanka gets the feeling she may not be getting the whole story – especially when the two guides keep shooing away a mysterious shadow that lurks by them – but she’s determined to find out more about her heritage and her birth. 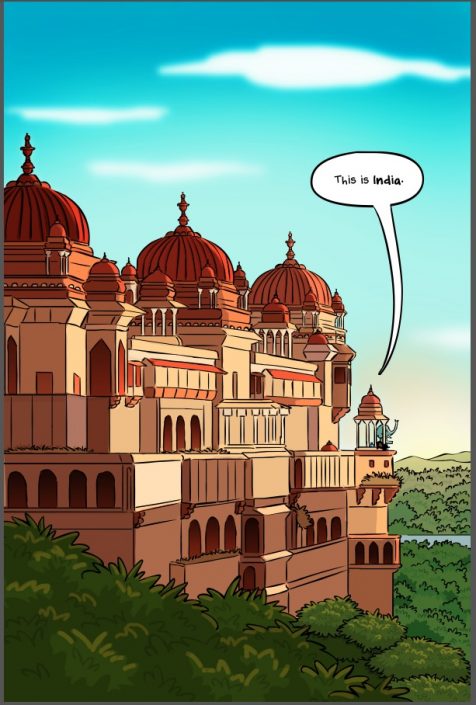 Priya gets the opportunity when her aunt calls to reconnect with her estranged sister. She’s pregnant, and Priya’s mom agrees to let her fly to India to spend time with her. Thrilled, Priya embarks on a journey that will provide more answers than she expected, and learn more about her mother – and herself.

Pashmina is brilliant, bold, and beautiful storytelling. It’s the story of a child walking the line between two cultures, and it’s a story about the search for identity. It’s also a powerful story of feminism; the goddess Shakti guiding women to choose their own paths and the women who are brave enough to answer the call. Nidhi Chanani creates breathtaking, colorful vistas within the pashmina’s world, making Priya’s everyday black-and-white world even more stark and humdrum. This is a must-add to graphic novel collections, particularly for middle schoolers and teens. Booktalk and display with Gene Luen Yang’s American Born Chinese, Na Liu’s Little White Duck, and Sarah Garland’s Azzi in Between.

See more of Nidhi Chanani’s art at her website.