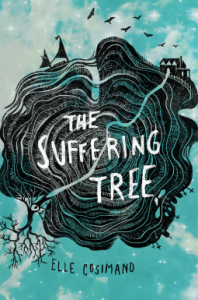 After her father’s death and her family’s eviction, Tori Burns, her mother, and younger brother, Kyle, move from Washington DC to Chaptico, Maryland; a small town with a lot of history. She’s received an inheritance of a house and land from a man named the patriarch of the Slaughter family, one of the oldest families in the area – she’s never met him, never heard of him – and his family are none too happy with it. Tori is miserable in the new house and with the Slaughter family, who seize every opportunity to be spiteful to Tori and her mother. Tori learns more about the Slaughter family’s dark history – and the history of the mythical Chaptico witch – when Nathaniel Bishop claws his way out of a grave under the oak tree in her backyard. It’s no zombie movie: Bishop was an abused, indentured servant for the Slaughter family in the 18th century, and he’s been brought back for a purpose that hasn’t yet revealed itself. Tori shelters him in the shed on her property as she struggles to make sense of the weird dreams she’s having. As she and Nathaniel unravel their histories, Tori uncovers the Slaughters’ secrets, finding herself a part of the mystery.

The Suffering Tree is a paranormal mystery that hinges on self-harm. There’s blood magic throughout the book, and the entire plot is set into motion once Tori – who self-harms – spills her own blood on the property. With references to rape, abuse, racism, and slavery, this is a novel that tackles some very big issues. Tori emerges as a strong character who struggles with cutting as a way to deal with the pain of her father’s loss and more recent stresses as the novel unfolds. Her mother isn’t a strong character at all, preferring to handle her daughter’s psychological issues by asking her if she’s okay and suggesting therapy throughout the book.

Teens are going to love this one. There’s suspense and the pace is intense. Booktalk with historical YA mysteries, like the Jackaby series from William Ritter; Stefan Petrucha’s Ripper, and Stephanie Morrill’s The Lost Girl of Astor Street.