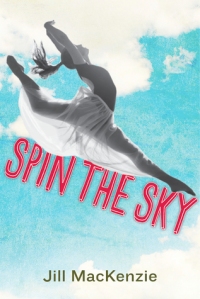 Eighteen year-old Magnolia Woodson and her older sister, Rose, have to live with the sins of their drug addict mother, who abandoned them after a tragedy a year before. Living in a small clamming town in Oregon, everyone knows who they are and what happened; the only folks who seem to think differently are Magnolia’s childhood best friend, George, and his mother, who’s taken care of the girls whenever their mother fell short. To change the way the town sees Magnolia and her sister, she decides she need to win the reality dance show, Live to Dance. She and George head to Portland to audition, but they make it! Now the real work begins: will the competition be too much for Mags? Will her friendship with George survive the stress of the show, and will she be able to live in the fishbowl that is reality television, especially with a secret she doesn’t want made public?

Spin the Sky has a strong premise that isn’t afraid to tackle some hot-button topics like drug addiction, sexuality, abortion, and miscarriage. Some of your more conservative readers may shy away from this one; steer them toward books like Sophie Flack’s Bunheads, Lorri Hewett’s Dancer, or Sarah Rubin’s Someday Dancer. Magnolia is a tough character to crack: she’s consumed with what other people think of her, and obsesses over winning the competition, seemingly just so that the town will accept her and her sister. She has a complicated love-hate relationship with her mother (understandably), and she has an unrequited crush on George, who she thinks is gay – and is really upset when it seems that isn’t the case. The other contestants all have their own issues that the author briefly touches on throughout the novel.

If you have readers who love reading about dance and are interested in reality television, Spin the Sky is a good backup for your shelves.