I attended my first ALA Midwinter this past weekend, and weather be damned, I had a great time. I wasn’t on any committees this time, but I was one of ALSC’s live bloggers, attended some great events, sent home an insane amount of ARCs, and, the most exciting event for me, attended the Youth Media Awards.

First things first: ALA is HUGE. The Georgia World Congress Center is tremendous. I’m a New Yorker, I’ve been to BookExpo and New York ComicCon at the Javits Center, but the Georgia World Congress Center is even bigger. I felt like I was a librarian Dora the Explorer, heading off with my tote bag, rather than my backpack, exploring the terrain. Thankfully, I didn’t have to worry about a snarky fox stealing my swag, and I was surrounded by pretty amazing librarians and their families. There were kids galore at the conference, which made me happy: let’s get the kids excited about what we do! Bring the next generation in!

Contemplating the big questions at the Penguin Random House booth

Let’s talk about the ARCs. Advance Reader Copies. I thought I brought home books from PLA last year, but no. I sent home a LOT of boxes – thanks for having the Post Office on site, ALA and USPS! – and a tube, because there are posters that I have the bulletin board space for (and a really cool Dragonwatch poster from Shadow Mountain) and can’t wait to show off to the kiddos here. I can’t wait to dive into these beauties and start reading and reviewing; some of the books I took home included the sequel to Joshua Khan’s Shadow Magic, Dream Magic; a new Gum Girl adventure, called Gum Luck; an Animal Planet intermediate fiction series, and the Shannon Hale/LeUyen Pham collaboration, Real Friends.  There is so much great intermediate series fiction and middle grade fiction coming out!

There were several maker events, and that’s right up my alley. One of my favorites was the DK maker event promoting their new book, Out of the Box. It’s filled with cardboard engineering projects. Projects that you can make using cardboard! I’m a librarian, I’m surrounded by boxes all day long, I got this! We each received a tote bag, and sat at tables with toilet paper rolls, paint pens, scissors, and instructions on making our own cardboard tube owls. My fellow make-brarians and I had a blast, laughing, talking, and trying to make our owls look like… well, owls.

I call this “myth vs. reality”.

A Scholastic literary event spotlighted some upcoming middle grade fiction. In Gordon Korman’s newest book, Restart, we meet a bully who’s lost his memory; Natasha Tarpley’s novel, Harlem Charade, blends mystery and art, starring a protagonist trying to solve the mystery of who attacked his grandfather, and Madelyn Rosenberg and Wendy Wan-Long Shang collaborated on This is Just a Test, which takes an often hilarious look at a Chinese-American Jewish boy in the early 1980s, who’s worried about nuclear war and his two warring grandmothers. 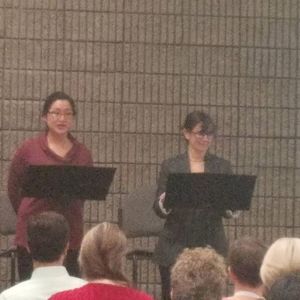 Each author spoke briefly, introducing themselves, their books, and what led him or her to write these stories. In a fun departure from the usual author readings, the authors engaged one another by turning their excerpts into a brief radioplay, where each participant took on a character role to act out the story. Scholastic was also kind enough to give us a tote bag full of books – the books spotlighted at the reading, and new selections from Emma Donohue, Kathryn Lasky, Lamar Giles, and Amy Sarig King.

I wanted so badly to meet John Lewis. I’ve been a fan of his since I read March: Book One several years ago, and was hoping upon hope that I could get to shake his hand. It wasn’t to be, sadly; the line to meet him stretched around the exhibit hall, and I chickened out. There will be another time, I hope.

Finally, the big time: the ALA Youth Media Awards. The biggies. The Caldecott, the Newbery, the Printz, all the big ALA awards for children’s and teen books happen here. It was such an experience, being in the room with other librarians and book lovers, celebrating the authors who have created memorable characters, told incredible stories. When John Lewis’ March: Book Three received an unprecedented FOUR AWARDS, we almost took the roof off of the Center! People were hugging, cheering, crying… it was an unforgettable moment, and I’m so grateful that I was there to enjoy it. You can find the full list of Youth Media Award winners here.

My first ALA was a heck of a great time. I’m not sure I’ll make it to ALA Annual this year, but there’s always next year. Lord knows I’ll be reading ARCs until then!

I’ve Storified my ALA Midwinter pictures here, if you want to see more.