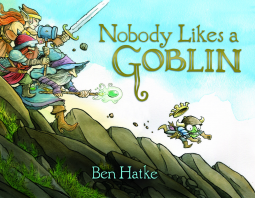 If you read my stuff enough, you know there are a few authors and illustrators that I adore; Ben Hatke is one of them. From Zita the Spacegirl to Mighty Jack and Little Robot, he creates fun, exciting characters, very human stories, and beautiful art. I am eternally grateful that he has also started sharing the love with picture book readers; first, we had Julia’s House for Lost Creatures, and now, Nobody Likes a Goblin.

It’s the sweetest little book about a homebody goblin who lives in his cozy dungeon and hangs out with his best friend, Skeleton. One day, a gang of dumb old adventurers barges in, loots Goblin’s treasure, and makes off with Skeleton – RUDE. Goblin sets out to rescue his friend despite the oft-repeated cautionary advice, “Nobody likes a goblin.” But Goblin doesn’t care, because he has a friend to save! 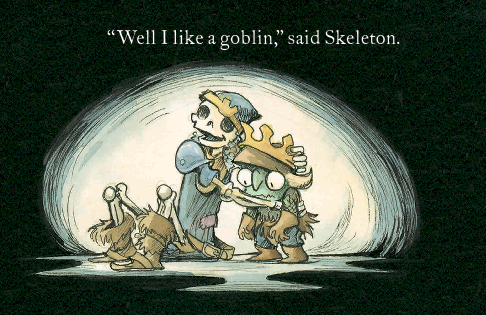 How cute is this book? It’s got adorable messages about friendship and being brave, not worrying who likes you or not, and just doing what you do. I decided to read this one to some of my slightly younger kids on a preschool-aged summer camp visit a few weeks ago, and they seemed to enjoy it. They kind of “ewwww’d” my poor Goblin at first, but when I told them that he was just a nice little guy and didn’t bother anyone, they were more sympathetic. By the end of the book, they were cheering for him. I encouraged them to hiss and boo the adventurers who were mean and went into poor Goblin’s house, breaking things up and stealing his toys, and was that very nice? NO.

I’d probably save this for a slightly older stoytime – maybe Kindergarten or first grade – because it was a little wordier than, say, Eric Carle, and they were getting antsy.  All in all, I’m thrilled with yet another Ben Hatke book (I never expected differently), and I’m happy that I’ve introduced him to a newer generation of readers.

4 thoughts on “Storytime: Nobody Likes a Goblin, by Ben Hatke”