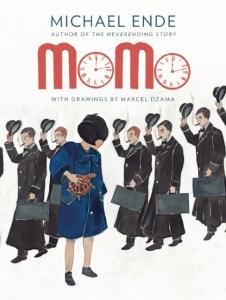 Momo is a little girl who just appears, seemingly out of nowhere, and lives by herself in a small amphitheater in town. The people in the neighborhood embrace her and seek her out; she has the gift of listening, that seems to help soothe everyone’s nerves, solves problems, and fixes broken friendships. But the awful gray men are moving in and sucking the joy, the life, out of the neighborhood’s inhabitants. They Gray Men recognize that Momo is special and are determined to get hold of her before she can throw a wrench in their plans to steal time from everyone around her.

I am a huge Neverending Story fan, so I picked up Momo with tons of good childhood feelings (and that Limahl song on a loop in my head). Much like Neverending Story, Ende tackles a lot of big concepts in a middle grade book. The Neverending Story gave us a story about conquering depression: The Nothing was a devastating darkness that threatened to consume all of Fantasia. Ende also uses The Neverending Story to address concepts like grief, loss, and existential crisis. It’s the kind of book you read as a kid and appreciate the fantasy, and read as an adult, on a completely different level. Momo is similar in scope, contemplating the loss of free time and personal relationships. Pretty weighty and forward-thinking, especially when you consider that this book was written 40 years ago, before we were consumed with smartphones, tablets, and cable television. Momo’s gift for listening makes her adored until the gray men – who live off the time they steal from everyone – decide to isolate her by corrupting everyone around her. Children aren’t allowed to run and play in the streets any longer; parents don’t have time to spend with their children because they’re working so hard to save up free time – the rat race isn’t a new concept, and Ende mourns a time when people knew one another by name, listened to one another, and had time for one another.

Previously published in hardcover in 2013, McSweeney’s is giving the book a proper 40th anniversary celebration, with new illustrations from Marcel Dzama and a new translation from the original German by Lucas Zwirner. I’ve seen The Neverending Story on quite a few reading lists over the last couple of summers, which makes me really happy – and I’m going to happily booktalk Momo to middle schoolers who are looking for more realistic fiction with a touch of the fantastic: no gnomes, no knights, no spells, but something… more. If you know readers who love Rebecca Stead’s When You Reach Me, give them Momo.