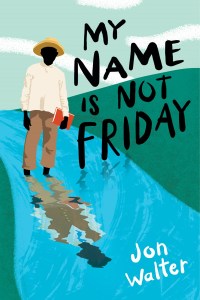 Living in an orphanage in the South at the end of the Civil War, Samuel is always trying to keep his younger brother, Joshua, out of trouble. The latest prank to be laid at Joshua’s feet is a big one; Samuel takes the blame to keep his brother safe, and finds himself sold into slavery as a consequence. He’s stripped of his given name, renamed Friday, and threatened to keep his true origin – that he’s a freeborn black boy – a secret. Told in the first person through Samuel’s eyes, readers get an often brutal, heart-breaking account of slavery in the last days of the Civil War.

My Name is Not Friday is a powerful book, at times difficult to read. The characters aren’t always likable, and they’re not always loathsome – that’s part of the struggle. It’s easy to hate the mustache-twirling, top hat-wearing villain, but when it’s a child who struggles with wanting to do the right thing – even when he doesn’t really fully understand the right thing – it’s not as easy. Friday is a sympathetic character, and the frustration of his situation comes across so strongly, that I had to put the book down a few times.

An important addition to shelves, My Name is Not Friday has received starred reviews from Publishers Weekly, Kirkus, and School Library Journal. Suggested for middle school and high school readers for overall content. Put this on your shelves next to Solomon Northrup’s Twelve Years A Slave and Alex Haley’s Roots, which returns as a mini-series on History Channel at the end of May.

From SLJ: An author’s note references historical documents, including Harriet Jacobs’s classic Incidents in the Life of a Slave Girl.