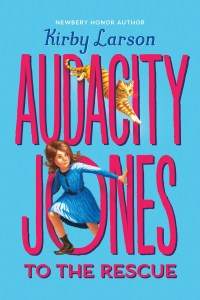 A spunky orphan with a sense for adventure, a faithful cat, and a home for wayward girls are all the right ingredients for this fun new historical fiction series from Scholastic! Audacity Jones lives with her friends at Miss Maisie’s Home for Wayward Girls. Miss Maisie is no Miss Hannigan (it’s a Little Orphan Annie reference, and I’ve really  just dated myself), though – she’s more benign than awful, more concerned with sweets than school, but the girls do just fine, largely thanks to Audacity’s keen sense of keeping things in order. School benefactor Commodore Crutchfield visits one day and tells the girls that he needs an orphan for a very special mission, and before she realizes it, Audacity is on her way to a very important adventure – before she’s done, she may have the gratitude of some very important people!

What Little Orphan Annie was to previous generations, Audacity Jones could well be for this generation. An smart orphan with a natural talent for knowing when something’s fishy, she and Min, a cat she’s befriended at Miss Maisie’s Home for Wayward Girls, find themselves pulled into a plot to kidnap President Taft’s niece. There’s intrigue, there’s excitement, and while Audacity is clearly the main character, her friends are very much integral to the plot. The characters are well-thought out and just plain fun to read about; the villains are bumbling, mustache-twirling goofs, easily outwitted by Audacity & Co. Audacity herself is just a great character: she’s upbeat, she loves books (the “Punishment Room” at Miss Maisie’s is a library, and Audacity finds herself being sent there often), and she’s always thinking – or trying to think – a few steps ahead.

This is a great new historical fiction series for middle grade readers – I loved it, and think it’s a must-have for collections. The book has received starred reviews from both Publishers Weekly and Booklist. I’ve got a lot of kids asking for historical fiction in my library, and this is a great period to introduce to readers who usually end up with the Old West or World War II. If you’re going to booktalk this, make sure to check out the author note at the end of the book – this story was inspired by a real-life event involving a distant relative of then-President Taft, which the author tweaked into this story.

Kirby Larson is the author of the 2007 Newbery Honor book Hattie Big Sky; its sequel, Hattie Ever After; The Friendship Doll; Dear America: The Fences Between Us; Duke; and Dash. She has also written a number of picture books, including the award-winning Two Bobbies: A True Story of Hurricane Katrina, Friendship, and Survival and Nubs: The True Story of a Mutt, a Marine, and a Miracle.

One thought on “Audacity Jones to the Rescue: New Historical Fiction Fun!”