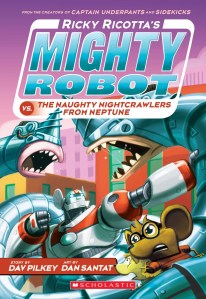 FINALLY, the last two books in the Ricky Ricotta series are here! You don’t understand; about a decade ago, my son – now a junior in high school – devoured the first seven Ricky Ricotta books. He loved them. I loved them. And then, there was nothing. We were down two planets! We waited. We watched. We hoped. We saw new Captain Underpants books hit the shelves, but Ricky remained silent. And then, a glimmer of hope: the entire line of existing Ricky Ricotta adventures were re-released, with Dan Santat’s amazing and colorful art taking the whole series up a notch. I ordered two sets for my library and booktalked this series like my rent depended on it (which, kinda, it does).

VINDICATION! In January, we got Ricky Ricotta’s Mighty Robot and the Naughty Nightcrawlers from Neptune! Patience pays off!

Ricky and Robot are finally back, and trying to think of something fun to do that won’t cause a giant mess. They find an old building that they can use material from to make a giant fort, and it looks like they’re going to have a great, stress-free day after all. Nah, just kidding: grumpy Farmer Feta next door is annoyed about the noise the two friends are making, and lets the evil Neptunian scientist, Nimrod Nightcrawler, use his property to dig a tunnel over to Ricky’s property to wipe them out! With some help from Ricky’s cousin, Lucy, and the now-tame Jurassic Jackrabbits from Jupiter, Ricky and Robot have to save the day again.

The adventure is laid out like the other Ricky adventures, with Dan Santat’s art really rebooting this whole series. He’s managed to leave in the most fun part of the books, though: the Flip-O-Rama fight sequence, where readers can flip the right hand page back and forth to make the picture look animated (and add their own sound effects). Nimrod ends up in jail with the seven previous bad guys, and we see one more cell waiting…

My son now considers himself too old for Ricky Ricotta. I, however, am just the right age; I’m also a completist – how could I not finish the series? I had a great time reading this book and revisiting a series that I enjoyed then and I still chuckle at now. Kids are drawn to Dan Santat’s art, and when I tell them that the same artist write and drew Sidekicks AND Beekle: The Unimaginary Friend, they’re even more excited, because they love seeing how they can recognize his art and yet spot the subtle differences in a picture book, graphic novel, and a chapter book.

Bottom line: this is a great series for libraries and collections. If you’re familiar with the series, you’ll love it; if you’re not, and you like fun humor with over the top robot fights and villains, you’ll love it.

Be on the lookout for Ricky Ricotta’s Mighty Robot vs. The Unpleasant Penguins from Pluto in May!