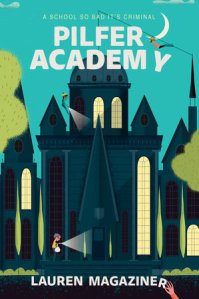 Out of the 6 kids in his family, George is the naughty one. He sneaks around the house and liberally helps himself to his sibings’ possessions: money, diaries, you name it. What George doesn’t realize is that he’s gotten himself in the sights of Pilfer Academy, a school for criminals. Everything in the school is stolen: even the students! George is kidnapped by two laughably bad criminals who double as teachers at Pilfer Academy, and he finds himself missing home as he tries to fit in among the newest class of thieves, all competing to be the best at being the worst.

After making a friend in Tabitha – the school’s top student – George gradually begins absorbing himself in his schoolwork and excelling in his classes, which include safe-cracking, disguise, and Thieving Theory. But when George takes his midterm on breaking and entering, he realizes that being a thief isn’t as glamorous as he thought it would be. But he can’t back out, lest he face the Dean’s dreaded punishment. Will George have to surrender himself to becoming the thief he doesn’t want to be, or can he and Tabitha put their heads together and figure out a way to escape Pilfer Academy?

Pilfer Academy is a hilarious middle grade comedy with a strong moral message. It’s a big joke when the kids are learning how to be cunning, top criminals, but when faced with the moral consequences of his actions, George realizes a great deal about himself and the people around him. I love the characters in this story. George is an obnoxious middle child that needs a bit of a wake-up call; Tabitha is a girl who wants to excel at any challenge she’s given – and when she doesn’t feel like she’s learning anything new, she’s done. It’s not that she wanted to be a career criminal, she was put into the situation and wasn’t backing down from a challenge.

The teachers are kind of like Hogwarts faculty gone hilariously wrong. They’re a ragtag bunch of supposedly successful criminals that can’t seem to get it together enough to tie their shoes, but there they are, teaching classes and getting students to listen to them. Mostly.

Fans of Spy School and the N.E.R.D.S. series will get a kick out of Pilfer Academy, and it’s a good addition to your middle grade fiction collection for kids who need a quick read that will keep them interested. So yes, give this to your reluctant readers, and give it to your book groups – there’s a lot of fun you can have with this book during a book talk, and there are enough spy crafts on the web to make a fun program out of this book.

Lauren Magaziner’s author website offers links to her social media, an event schedule, and information on her books.