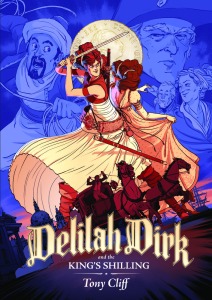 Delilah Dirk is a swashbuckling, 19th century heroine who travels the world in search of adventure. In her first graphic novel, Delilah Dirk and the Turkish Lieutenant, we met Delilah and Selim, the Turkish lieutenant whose life she saved. Salim is now bound to travel the world at her side.

Delilah and Selim’s latest adventure puts them in the sights of the English army. When Delilah identifies a traitor to the crown, he turns the tables on them: and now the twosome are on the run after being accused of espionage. Where do they end up? Back in London, naturally. Delilah’s got a reputation to clear, and nothing’s going to keep her from it: even if it means going up against the traitor, sword to sword, all by herself. But while they stay at her mother’s home, Selim has the unenviable task of posing as her footman, and Delilah has to knuckle down and be girly, to keep up appearances. Dresses and tea rather than sword-slinging and trousers? Heavens, no! Selim is about to discover that there are a lot of things he doesn’t know about his friend, too: for instance, who’s Alexandra?

This is the first Delilah Dirk adventure I’ve read, and I enjoyed it. The adventures are self-contained, so you can pick this book up without really knowing much about the series thus far. You’ll catch up quickly and lose yourself in the adventure. Delilah is a fun, strong female protagonist, and Selim is a friend, a compatriot, and a long-suffering partner. There’s no romantic relationship here; it’s a buddy movie, complete with wacky moments and smart comebacks.

The art is colorful and fluid; lots of movement drawn nicely by writer/artist Tony Cliff. Delilah is always in motion, and her billowing dresses and slashing swords move with the character. Middle schoolers and up will enjoy the adventure-packed series, which you can also read for free online: the Delilah Dirk webpage presents part of The King’s Shilling in serialized format, and will be available and updated until March 8th, when the book is available for purchase and the first chapter will conclude. After the first ninety pages, the remaining one-hundred-and-seventy-six will only be available in the book. The first 80 pages of The Turkish Lieutenant, and a free ebook, Seeds of Good Fortune, are available on the site, too.

Take a look at more of Delilah Dirk and The King’s Shilling below, then go check out the website and add this book to your graphic novel wish list! 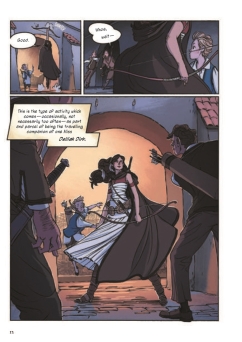 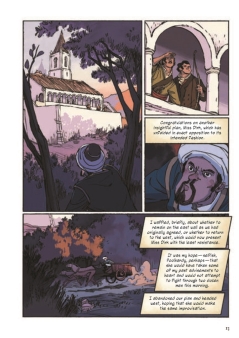