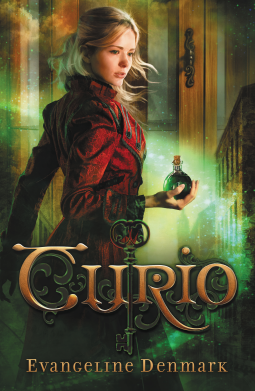 In a post-cataclysm Mercury City, Colorado, a group of alchemists, called Chemists, are the ruling body, controlling the populace through draconian laws, torture, and distribution of a daily potion that helps citizens survive after a plague ravaged society a century before. Physical contact between males and females comes with a price; a price her best friend, Whit, learns after trying to help Grey home in time for curfew. After Whit’s brutal punishment, Grey takes a risk she’s been thinking about for too long – she gives him her ration of potion. She knows she and her family are different – her father and grandfather don’t take it, and she suspects she doesn’t need it, either. This provides the Chemists with the chance they’ve been waiting for: the chance to get hold of Grey and attack her family. She seeks refuge at her grandfather’s repair shop, where her only chance at escape is to enter the world of the curio cabinet in the back of the shop: there, she finds herself in a world of living porcelain and clockwork figures, swept up in a class struggle of their own, and a mysterious figure known as the Mad Tock. Could he be the mysterious person she was told to seek out?

Curio is a curious mix of post-apocalyptic and steampunk genres. Grey is a standard YA post-apocalyptic heroine, spunky and strong-willed, ready to take on the system. She’s got a special secret to be revealed and a family history that she only knows the surface of. The world inside the curio cabinet is a steampunk society, with “tocks” – clockwork figures that make up the working class – and “porcies”, the beautiful upper class. It’s a skin-deep society; the fragile porcies are terrified of cracks or breaks, because they’ll be banished to “Lower”, with the rest of the lower class and broken, to eke out an existence. We spend a lot of time in Curio, but a lot of it is laborious. There is a lot of concentration on the porcies’ fascination with Grey and where she could be from, and the villain of the story is enticing but not as fully realized as he could be. The Mad Tock storyline could also benefit from more emphasis on his story earlier on, and less on his gadgetry.

There’s some strong world-building on both sides of the curio cabinet, but the overall storytelling lags. The one plot that doesn’t lag at all is the love story, and that happens so quickly that it is difficult to believe (but that could just be my personal taste).

Curio is an interesting mashup of two genres I never pictured working well together, but they do. There’s potential for a series here, and indeed, there is a prequel, Mark of Blood and Alchemy, available as a free download for Kindle and Nook.