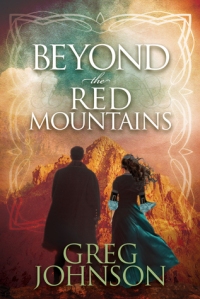 Teenagers Kelvin and Elizabeth are from two different worlds – or so they think. Kelvin, an apprentice fisherman, comes from a land called Triopolis, ruled by a corrupt bishop. Elizabeth, orphaned as a child, has been raised to marry the future king – a marriage that exists on paper only. When Kelvin and his mentor, Henry, end up in Elizabeth’s land of Westville, it’s the first each of them have heard of people outside of their own lands, other than the barbarians. As they learn more about one another, they discover that there are many secrets surrounding their lives; secrets kept by men in power all around them. A tragic accident causes Elizabeth and Kelvin to flee Westville; Kelvin decides to bring Elizabeth back to the safety of Triopolis. The journey they embark upon will introduce them to more men, with more secrets – secrets about Elizabeth’s own burgeoning special abilities, and secrets that can save or destroy Triopolis.

The overall plot of Beyond the Red Mountains is intriguing. I love a good epic fantasy, and had high hopes for this one. I have to admit, it was a bit of a struggle when it came down to it. The book could have used more of a guiding touch from an editor; many concepts and ideas were over-explained and over-emphasized. Short, choppy sentences added to start-stop reading; ideas could have been joined together and made for a smoother read. The book ends with the promise of a sequel, which I look forward to – it’s a good premise that true fantasy fans will stick with, but a more reluctant reader or a casual reader may not stick with this one.