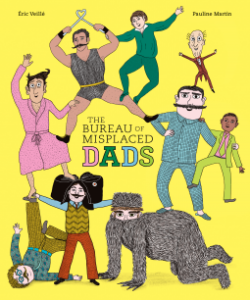 A young boy misplaces his dad one morning, and heads over to the Bureau of Misplaced Dads to see if he ended up there. Dads show up there every day, many of whom are reclaimed the same day, some who have waited a while, and some who get released into the wild. There are dads of all shapes and sizes, with all sort of quirks and talents, but is the boy’s dad there? And does he want a replacement dad if he’s not?

This is a cute story that will go over well in a storytime, as kids get to see all kinds of dads: strongman dads, dads named Michael, dancing dads, and clueless dads, for starters. The very idea of misplacing one’s dad will be familiar to any child whose parents have “gotten lost”, whether in a department store or in the same home.

The retro, digital artwork is entertaining and lively, with bright colors, exaggerated mustaches, and crazy costumes; various dads strike wacky poses as the little boy looks on, searching for the perfect dad: his.

The book is light and played for laughs, and would also make for a fun cuddle time story at bedtime for Dad and kids. I’m going to add this to a storytime and have the kids draw a picture of their dad on a milk carton template.

One thought on “Where do dads go when they’re lost? The Bureau of Misplaced Dads!”